John Donne, a master of wit uses unusual metaphors to convey the love between a man and a woman. The Flea is amongst such an unusual love poem, where the poet uses a flea to reveal his sexual interest with his lover. As Donne uses unusual objects or subjects for his poems as one can observe in “Jealousy” or “A Valediction: Of my name, in the window“, the reader can expect the same in The Flea as well. In fact, this poem has one of the most unusual topics that one could ever relate to love. Published in 1633, the poem is about a man trying to convince a woman to have intercourse with her and he shows that it is not a sin as flea already mingled their blood. The poem is witty, romantic, fascinating, and is one of the best poems of John Donne.

The speaker curiously asks the woman to take notice of the flea and to consider about the act it has done. He compares the act of the insect which sucked their blood to that of the speaker’s whose intention is to mingle with his beloved. As the insect has combined their blood, it would be superfluous to call their anticipated union as shameful or sinful. According to the speaker, the insect has mingled their blood in a way that they cannot possible do or achieve; hence, he asks her not to think of their meeting as a loss of maidenhead. 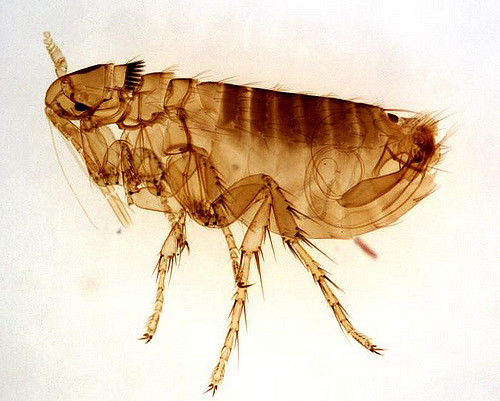 She attempts to kill the flea, but the speaker implores her to not to commit the act. He attempts to convince her by saying that the insect has his life and hers because of the blood it sucked. He also says that it is the place where they are married within the walls of the insect. However, his beloved doesn’t heed to the words of the speaker and attempts to kill it again. The speaker once again tries to convince her and says that it would be a murder and suicide at the same time. He adds that it would be a sin to kill three lives – the speaker’s, hers and the insect’s – because flea has the blood of the three.

The speaker’s beloved kills the flea suddenly and with cruelty. He claims that the insect was innocent and wants to know the sin of the creature! She says that by killing the insect, neither of them has lost any honour and it didn’t make them weaker also. This is used by the speaker to convince that there is no loss of honour if she yields to him and it would be as simple an act as killing the flea.

John Donne is famous for his metaphors that reflect his sexual ideas or desires beneath the lines of the poem. This witty masterpiece is divided into three stanzas with nine lines each. The rhyme scheme of the poem is “AABBCCDDD”. The title is little deceiving but is appropriate to the intention of the poem as John Donne uses the insect – flea – to reveal the desires of the speaker.

The poem starts with the speaker trying to grab the complete attention of his beloved. He uses the word “Mark”, which is used to convey something very important. He shows the flea and by exemplifying its act of sucking their blood, tries to show how trivial her denial is. The insect has enjoyed their blood and it is neither a sin nor a shame, so he questions the idea of the beloved about her rejecting his advancements. The speaker compares the sucking of the blood and their mingling the insect’s body to the sexual meetings of human kind.

The insect has enjoyed the taste of them both and swells with happiness, whereas the speaker is still in pursuit of his interests and proclaims that it is not a sin or a shame to lose maidenhead [virginity]. It is even a meagre act than the one performed by the flea, as it was capable of fusing their blood for its enjoyment. John Donne personifies the insect and attributes it pleasure and enjoyment, while in reality sanguineous insects drink blood to survive.

The comparison between sex and sucking of blood really sets the tone in the first stanza. The speaker indicates that a tiny creature has made their blood unite and it is the same with an intercourse also. However, the initial pursuit of the speaker fails, as in the next stanza the beloved attempts to kill the insect.

The revelation of the truth that the insect has indeed coupled their bloods is not liked by the woman and she tries to kill it. The speaker attributes “Holiness” to the flea by remarking that the act of the flea has made it their “marriage temple”. The mingling of three bloods also alludes to the Christian concept of three lives that exist in an individual, indicating that they have surpassed the humanly conditions of ceremony, fidelity, constraints, parents, etc. They are safely together within the walls of the flea.

The parents grudge indicated in the second stanza shows that the speaker has already tried to advance his motives, which is not liked by her parents who believe that a union should take place after the marriage rituals. He then returns to imploring her to not kill the insect as it would be killing three lives at once. “Killing Three” refers to three forms – murder of the speaker, sacrilege of the holy being that united them (flea) and suicide of the beloved.

The speaker’s arguments and efforts are shattered by the beloved, as she kills the flea at once staining her finger nails. She proudly claims that by killing the insect she doesn’t see him or her as becoming weak. This goes against all the argument done by the speaker in the second stanza and she dismisses them by one act and declares her victory over his pursuits. However, the speaker is clever enough to turn the words of his beloved against her.

The speaker says that since the flea’s act of uniting their blood did not weaken them and is considered as a small incident; then, the act of having sex is also the same as it would only do what the flea has done, but in a larger scale. As the flea is living creature and so is man, it doesn’t matter about the size as both the deeds would be committed by living beings. So, he asks her again to yield to his requests.

The Flea by John Donne is a revolutionary poem when one compares it to the principals of those living in the 16th century. However, John Donne uses his words carefully and never shows any obscenity even when he discusses about private matters such as sex.  The ingenious play of words, metaphors, wit and the love theme makes “The Flea” one of the best poems in literature.