Johann Heinrich Füssli or Henry Fuseli who covered painful, gruesome, supernaturally inclined themes to paint; produced some of the best know artworks of the world. Thor Battering the Midgard Serpent, The Nightmare, Night-hag visiting the Lapland Witches, etc. are horrifying yet seem realistic when the observer enters into the world of those paintings. Fuseli’s version of Milton dictating to his daughter can be placed under the same tree.

For twenty years Milton suffered blindness and a certain cause for his blindness is not known. It is assumed that it might be because of glaucoma and the accumulated stress to write all his thoughts without having enough time. Politically speaking, Milton was a Puritan and he wrote numerous pamphlets and other works in support of Puritanism. In addition, he propagated ideas on freedom of speech and divorce. Apart from these his ideas on other subjects and allotting time to them eventually led to loss of vision in both eyes in the year 1652.

The greatest works of Milton including Paradise Lost are produced after 1652. This dedication towards politics, social welfare and literature even after vision loss attracted Henry Fuseli. Thus he created Milton Dictating to His Daughter in 1794 in admiration towards John Milton. Fuseli also painted other aspects of Milton’s life and his works especially Paradise Lost.

Milton Dictating to His Daughter Analysis

This painting is the most renowned one among the three paintings done by Fuseli on the life of John Milton. Eugène Delacroix, Soma Orlai Petrich, Joseph Nash, Mihály Munkácsy, Nicaise de Keyser and others have created their own versions of Milton Dictating to His Daughter. Each of these paintings presents a different note on the subject and is interesting to study as an art enthusiast. 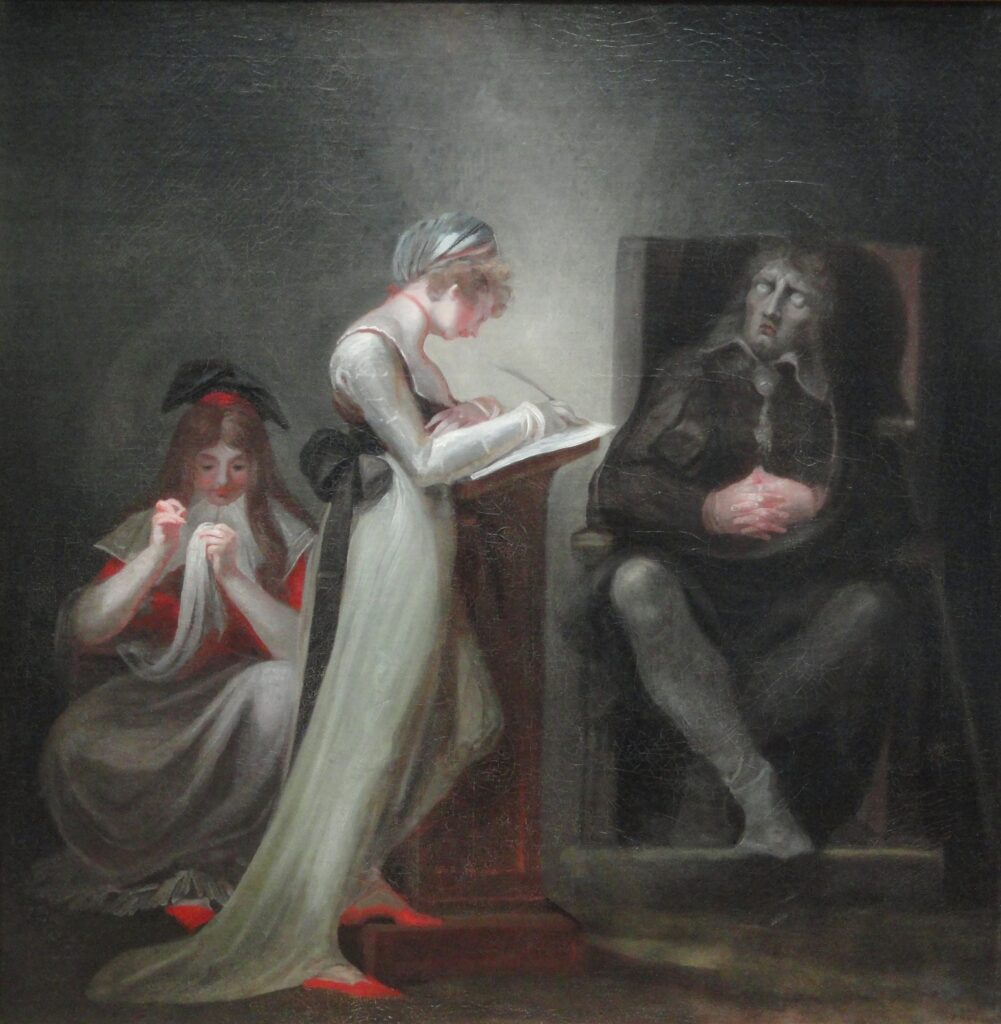 There is a stern contrast between the daughters wearing bright clothing and extravagant footwear in comparison to the dark and gloomy Milton in the painting. Milton is depicted in black with shadows around him. But, his posture suggests that he is calm with crossed legs and hands.

The most important aspect of the painting which draws awe and criticism is the way Milton’s eyes are portrayed. John Milton’s eyes are musky white and he is looking up, as if staring at Heaven, while dictating Paradise Lost to her daughter. Fuseli shows Milton as a person who was having Divine visions despite being blind and this is the main emphasis of the whole painting.

Milton’s daughters are composed as well with attire completely covering their body as one would expect from a Puritan family. Both are shown doing some work, one is involved in stitching while the other actively in writing the thoughts of her father. Both the women are serene and look quite happy with their work. The background of the painting neither shows books nor paintings unlike other works of Milton Dictating to His Daughter. It is color in different shades and probably the power of words or the visionary power of Milton creates a bright light between him and the daughter holding the quill.

Henry Fuseli, probably one of the first artists to depict the scene, embedded his own style to the household of a Romantic age Puritan. Many critics argue that Munkácsy’s version of Milton Dictating to His Daughter is the best representation while some say Fuseli’s is the best. In the end, it all comes down to the observer to decide.