The early Romantic period painter Henry Fuseli had quite a fascinating career and inspired people like William Blake through his works. Although, Fuseli’s fame was mainly due to the painting “The Nightmare”, the Norse mythology based artwork – Thor Battering the Midgard Serpent – is no less a painting with a wonderful depiction of a complex idea. The painting was completed in the year 1790. To understand the painting entirely, it is a prerequisite to know the incident depicted in the painting according to Norse mythology. 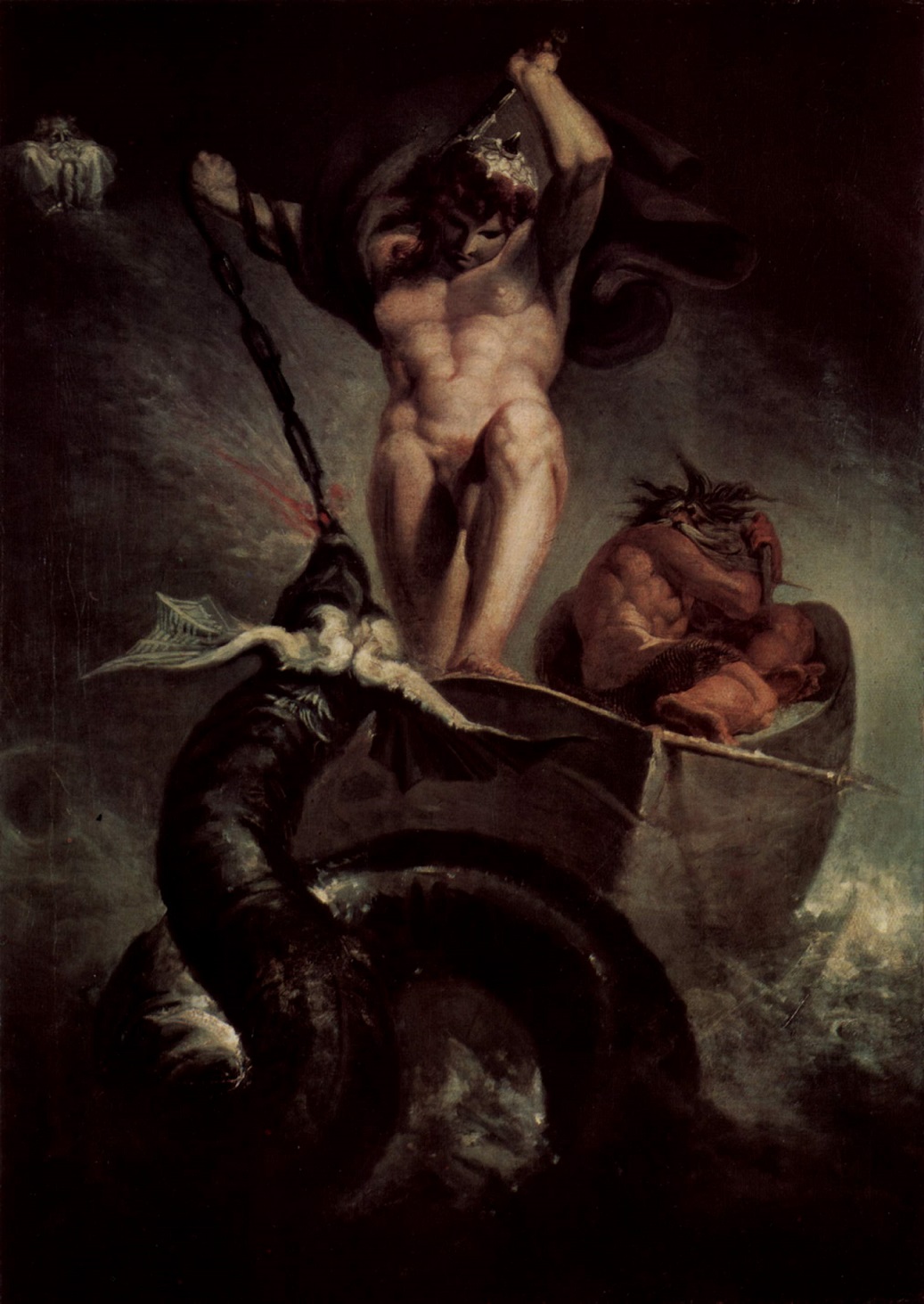 Thor disguises as a youth and leaves Asgard and travels far. In the evening, he finally confronts a giant named Hymir, who receives him well. Thor decides to spend the night at the place of Hymir. The giant is accustomed to fishing and when the daybreak he prepared himself to leave for fishing in his rowboat. Thor awakens and asks the giant to take him for fishing. However, Hymir expresses his thoughts that Thor won’t be of any help and believes that he will become sick due to the effect of the sea.

Thor insists on coming and remarks that he will row very far into the sea and if that isn’t the case, he will acknowledge his deficiencies and steer the rowboat back to the shore to get off. As being “slightly” ill-tempered Thor loses patience and decides to use his hammer on Hymir, but controls himself as he wishes to use all his strength for another purpose. Hymir asks Thor to get a bait and Thor selects and Ox that belongs to the giant. The Ox was named Sky-Bellower, for it was very huge and Thor decapitates it to make use of the Ox head as the bait.

Both enter the rowboat and Thor rows the boat with such magnificence that Hymir believes that they were making great pace within short time. They reach the usual fishing place of Hymir, where there is abundance of flat fish. But, Thor expresses his ideas to go farther and start to row the boat swiftly. As they move forward, Hymir feels that they have come dangerously close to the lair of Jörmungand or the Midgard serpent. However, Thor insists to go a bit farther and this displeased the giant. After feeling content with the distance they have made, Thor halts the rowboat and creates a very strong line and hook. He takes the Ox-head and places it on the hook as bait and flings it overboard.

Jörmungand takes the bait and takes a bite at the ox-head. The hook gets pinned to the mouth and the serpent jerks so hard that Thor knocks his fists to the gunwale. This angers Thor and he uses all his might and to establish a firm grip digs his heels hard into the boat. Unfortunately, the boat couldn’t bear the pressure and his legs go through the wood. However, he neither loses grip nor confidence; he drags the serpent on board. Both of them stare at each other. Jörmungand belches poison and at the site of this, Hymir trembles in fear. He observes that because of the wriggling of the serpent, the sea is rippling severely and the boat might sink into the water or consumed by the waves.

As Thor took his hammer and was about to strike the giant serpent, Jörmungand recognizes the threat and uses the gunwale (as a knife) to cut loose from the line. The Midgard serpent escapes into the sea, but Thor relentless to kill it fires his hammer – Mjölnir – to strike the serpent. People believe that the hammer did strike the serpent and its head got separated. However, Jörmungand goes deep into the ocean and survives the assault of Thor.

Henry Fuseli depicted the scene with great accuracy and one could feel that the characters from the myth are alive. The nude depiction of Thor indicates the influence of Neoclassicism on Fuseli. The serpent is seen face to face with a furious Thor. Hymir is seen with his face turned towards the boat terrified with fear. The omnipresent nature of Odin is indicated by portraying him amongst the clouds looking at the fierce battle. His omnipotence is contrasted with the ominous nature of Jörmungand, the Midgard serpent who is shaking the water. The sea seems to be churned with the movement of the serpent and the waves seems to have merged into the clouds.

The enormous waves indicate the humongous nature of Jörmungand, which is said to be so large that it can encircle the entire world with its body. Henry Fuseli in Thor Battering the Midgard Serpent quietly agrees to the enormous nature of the serpent with the use of colours. The sea is similarly coloured with the serpent and it is hard to distinguish between water and the serpent’s body. This shows that the serpent is gigantic.

Meanwhile, Thor is highlighted with a distinct light coming from the clouds. This is the lightning that Thor uses to power his hammer – Mjölnir. Thor is about to strike the serpent and the drama is depicted by Fuseli in an admirable passion reflecting all the great characteristics of Romanticism. Further, the might of Thor and his divine power is valiantly show case in the painting – Thor Battering the Midgard Serpent.