Robert Graves (Robert von Ranke Graves) was an expert translator with many translations of Greek and Latin texts. However, he considered himself as a poet and is a conventional poet of the age who was not influenced by the poetic charisma of T.S. Eliot. He produced more than 140 works during his lifetime and was considered a great novelist, poet, translator and critic. In Broken Images represents the contrasting nature of thinking. Throughout the poem Graves tries to establish the difference between traditional thinking and radical thinking.

The poet starts by referring to another person who has a clear mind while thinking. However, he feels that he is not as fast as the other and often think in broken images. The clear thinking of the quick thinker makes him dull and to trust his images or ideas without thinking about the relevance of a thought. Whereas the slow thinker (speaker) doesn’t believe in straight ideas and questions the relevance of every image that crosses his mind, which makes him more inquisitive to the ideas or facts that surround him.

As the clear thinker believes everything he sees, when the ideas seems to fail he starts to question the authority of his senses. In contrast, when the speaker sees that facts are failing, he begins to approve the nature of his senses. This is an unending process as the other thinker continues to sustain his way through dull and standard thinking, whereas the speaker tries to get a new viewpoint on everything through sharp and slow images.

This leads to creation of a lot of confusion in the mind of the quick thinker, who starts to have questions about his understanding of the laws that surround him. On the contrary, the confusion that arises due to broken images is understood by the speaker because of the radical thinking. Thus, the poet ends the poem – In Broken Images – by stating that progressive thinking although seems chaotic, ultimately finds the solution which is not the case with traditional thinking.

In Broken Images by Robert Graves is a very straightforward poem, enabling anyone to understand the message of the poet. But, the poem represents a Universal battle of the human race being traditional and moving away from the traditions to think of new perspectives. The poem is best understood when one demarcates the two voices found throughout. As mentioned, the two voices are understood as those of a traditional thinker and a radical thinker. It is even interpreted that the two voices belong to the speaker, where “He” represents the mind always striving to follow the norms of the society and the “I” represents the heart that is curious to learn new things.

To understand in a different perspective, education or the cognitive abilities of human beings are always restricted by the principles of the society or the system that runs it. Most people acknowledge that it is for the ‘greater good’ that such restrictions are levied on the people. However, there are those who oppose the norms of thinking. Those who do not agree with the system range from philosophers to artists to poets. The ‘necessity’ of thinking different is what drives such people into creating a microcosm of thoughts that can inspire and awaken generations. In Broken Images by Robert Graves is a poem that clearly explains the flaws of traditional approach and the limitless advantages of analytical thoughts.

In the following images, the poem is split into two voices used by Robert Graves to give out a clear understanding of the declination and inclination of the voices. 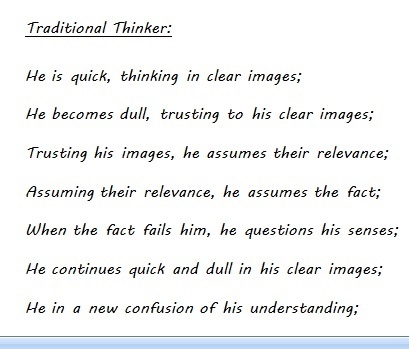 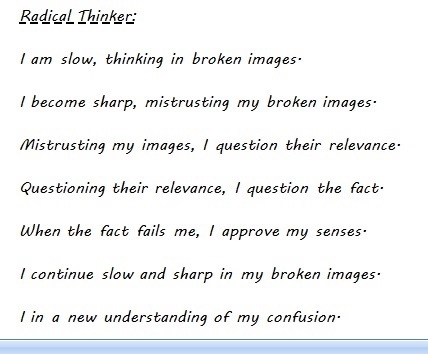 The traditional thinker is quick because the ideas that he get are spoon-fed from childhood. The best example one can take is the teaching of rules in a class. The students neither have knowledge about the rules nor do they show interest in knowing more. All they do is memorize the rules taught by the teacher and use it to reach the next step. When such rules are to be implied in practical situation, there is no way the student could find methods to use the rules to succeed on the task given to him. It is in this situation, where the traditional thinker starts to question the relevance of the facts he was taught. As his way of thinking holds him back to think beyond the facts, he doubts the capabilities of his senses leading to uncertainty about his cognitive abilities. However, there is nothing much anyone can do if an individual grows in a linear atmosphere. So the speaker asserts that the traditional thinker will move forward in his own, dull way still confused about his senses.

On the contrary, the speaker is slow in understanding things and his snail pace is due to the desire to understand things around him. The reason for everything to look as “Broken images” is the fact that speaker mistrusts and tries to critically understand things. The best example one can take is those who research or write with imagination. The imaginative thinker questions the authority of a rule and tries to deconstruct the rule to understand the core meaning and how it can be applied during practise. This questioning leads to new understanding of things, which helps to conclude new facts about a rule. The radical thinker then approves that the facts are deviant and his senses have shown the right path. As this is a very difficult (yet very successful) way to go about things many would not chose this path. But, the speaker is content with his slow analytical thoughts which connect the relevant facts and clear all the confusion that arises due to a problem.

The essence of the poem In Broken Images is very strong and Robert Graves dealt with the theme in a very pleasant and thought provoking manner. The fact that the poem is written as a comparison between two minds will entice the reader to understand the two major thought processes that decide the nature of an individual. Being a poet, Robert Graves clearly tilts towards the radical thinker, which in many ways is the proper way to understand the nature of the world.