Sandro Botticelli, a distinguished Italian painter from the early Renaissance period, has produced many religious as well as pagan art works in his lifetime. The training of Fra Filippo Lippi, another renowned painter, made Botticelli understand the techniques of the art work with perfection. In addition, Botticelli was a draughtsman making it a bit convenient for understand the use of dimensions while painting. Primavera and The Birth of Venus are considered as the masterful achievements of Sandro Botticelli.

The Birth of Venus is painted when Botticelli was under the patronage of the Medici family. It is not clear about the exact date or year of the creation of the painting and is generally believed to be done in the 1480s. The artwork was not done with typical oil painting found today but a method known as Tempera has been used. Tempera is a method in which pigments are mixed in binding agents such as egg yolk, casein, honey, etc. It helps the painting to survive for many years. In addition, the painting is done on canvas which is contrary to the time of Botticelli. The use of wood was still prevalent but Sandro Botticelli preferred the use of Canvas for many obvious reasons. 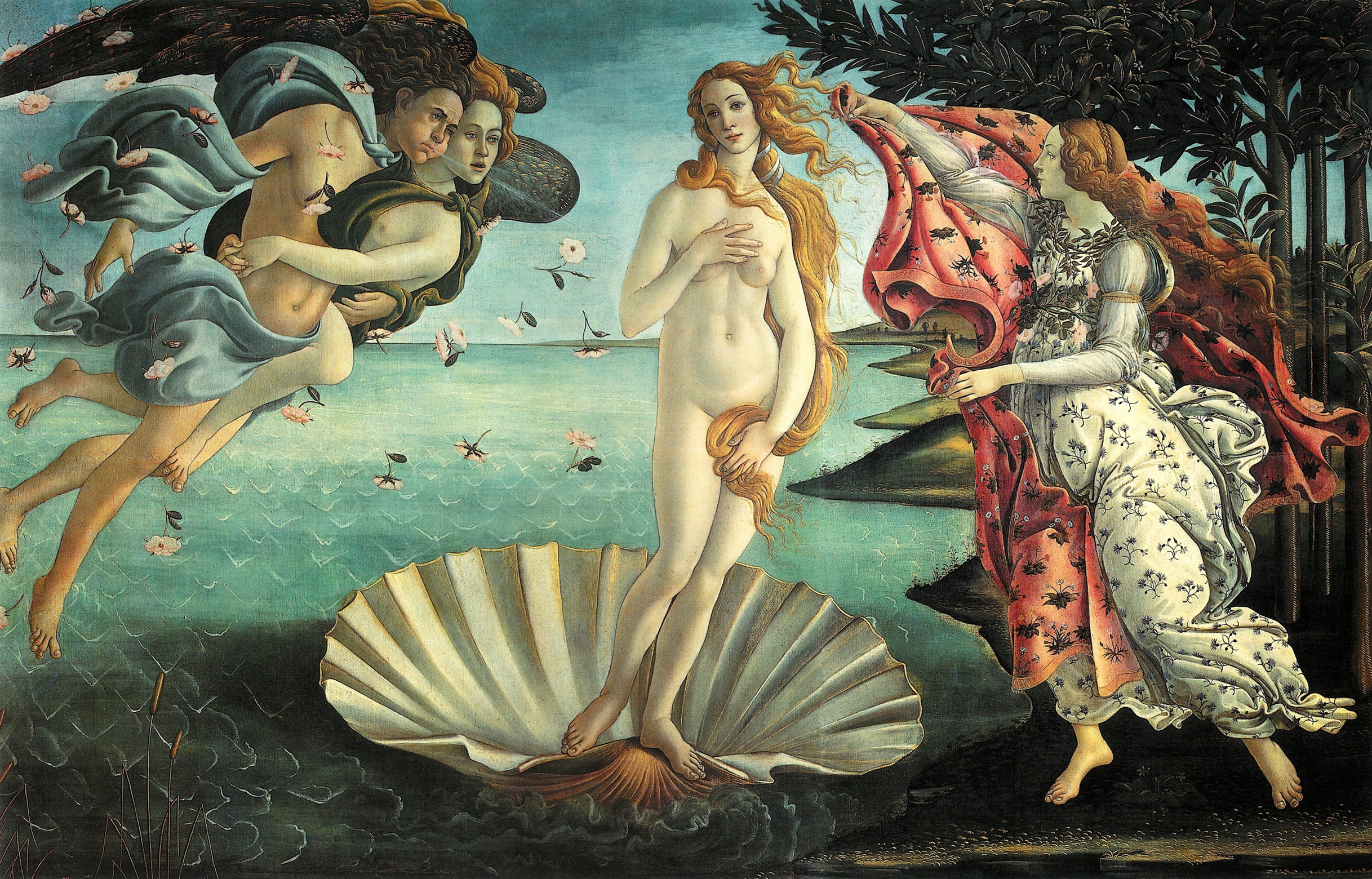 The Birth of Venus –References

In Theogony, it is written by Hesiod that Aphrodite was formed in foam after the genitals of Uranus fall in the sea. Uranus is the son and husband of Mother Earth Gaia. Their union produces twelve Titans, three giants with one hundred hands and Cyclopes. Uranus dislikes the Titans and imprisons them in Tartarus. Tartarus is a place deep within the Earth and the Titans cause pain to their mother. Gaia understanding them creates a sickle to take revenge on Uranus. However, Titans do not dare to confront their father but the youngest of them Cronus accepts to take the sickle. He ambushes Uranus, uses the sickle and castrates him. The testicles of Uranus fall into the sea and out of the sea foam emerges Aphrodite.

The main focus in the painting by Sandro Botticelli – Venus standing on the scallop shell represents a typical statue form. There are many statues that survived for centuries and most of them appear the same as Venus in the painting. Classic statues like Venus de’ Medici, Venus de Milo, Capitoline Venus, Aphrodite of Menophantos, etc. have same standing posture as in the painting. However, it is highly unlikely that Botticelli would have seen most of these statues but would have definitely heard of the Praxiteles style of creating sculptures. It is a style in which nude forms of male or female are depicted without any covering. Females are shown with hands covering the sexual organs with hands, while men are shown without any covering. In The Birth of Venus, the goddess is depicted in the same manner.

In addition to all of the references that Botticelli might have got, there was one custom that would have enriched the thoughts on the subject. The Medici family would invite many artists, philosophers, etc. frequently to meet and discuss about classical arts. Angelo Poliziano was amongst the visitors who wrote a poem about the events during the birth of Venus with the title Stanze per la Giostra. The description of Venus, being pushed towards the shore with the help of windblown by zephyrus and one of the Horae waiting at the shore, is exact in the painting.

The Birth of Venus – Analysis

[Note: The right and left directions given in the analysis of The Birth of Venus is mentioned according to the point of view of the viewer.]

There are four beings present in the painting – Zephyrus, Chloris, Venus and Hora. Zephyrus and Chloris are together floating in the wind and Zephyrus is shown to blow the wind so that Venus could reach the shore. The wind is in motion towards the shore and it is depicted by the moving flowers to the right of the canvas. In addition, it also relates to the happy union of Zephyrus and Chloris who are considered to be married [according to some texts].

The movement of the scallop shell and Venus on it is shown by her presence slightly towards the right of the canvas. Venus stands on the scallop without any emotions in the face. Her hair is portrayed beautifully, which is a representation of the typical woman during the period of Botticelli. Her face is clear and has an underlying glow representing her divine nature. Venus is floating in water with the help of a scallop shell. This part of the subject is brilliantly covered by Sandro Botticelli. Her hair, the body posture, and the right hand are pointing to the shore. It is to be noted that no childhood is ever mentioned for Venus or Aphrodite; hence she is depicted as a young girl rather than an infant in The Birth of Venus. Hora of the spring is well dressed and is holding a robe to cover the body of the arriving Venus. The island is supposedly one of Cyprus or Cytherea.

The Birth of Venus also stands out as a painting that depicted nude female body outside the Christian faith. In general, such representation was done only when an artist tries to show some part of the stories found in The Bible. It is a remarkable attempt because it made other artists to realize how female nudity can be presented without any offence to the general public. Further, the portrayal of Venus, a pagan Goddess, as nude similar to the depiction of women in Christian paintings show that the unification of several religions and the respect of Sandro Botticelli towards other civilizations.

The early and high renaissance periods focused on humanism and The Birth of Venus is also considered to have the values of the movements. This is especially strengthened by the depiction of Venus with a normal human body without perfection as can be found with other paintings where gods or goddesses are shown with unbelievable perfection. There are numerous other interpretations from different point of views like relation with Christianity, Neo-Platonism, etc. Whatever the interpretation is, Sandro Botticelli has given one of the best paintings in the world through The Birth of Venus.