Sir Peter Paul Rubens is a well known artist in the Baroque period famous for his extravagant use of colour and fearless use of sensual images. Rubens in his lifetime has produced hundreds of artworks like The Descent from the Cross, The Fall of Man, Maria de’ Medici’s arrival in Marseille, Last Supper, etc. He was very interested in depicting the mythological scenes taken from Greek and Christian texts. The painting – Samson and Delilah – is such a mythological depiction of the death of Samson as seen in The Old Testament. The painting was completed in the year 1609 and is now exhibited at the National Gallery, London.

To fully appreciate Samson and Delilah by Sir Rubens, it is only fair to know about Samson and how he died because of a woman. The name Samson first appears in The Bible in the 13th Chapter of The Book of Judges [The Old Testament]. The journey of Samson ends with his death at the end of Chapter 16. Find the complete story of the life and heroics of Samson from here: The story of Samson as in The Bible.

The story of Samson and Delilah inspired many artists across the world. The particular scene of Samson sleeping on the knees of Delilah, whilst a man cuts the locks of the man is the one that seemed to stir a lot of inspiration. Peter Paul Rubens, Rembrandt van Rijn, Anthony van Dyck and many other artists depicted the scene in their own way. 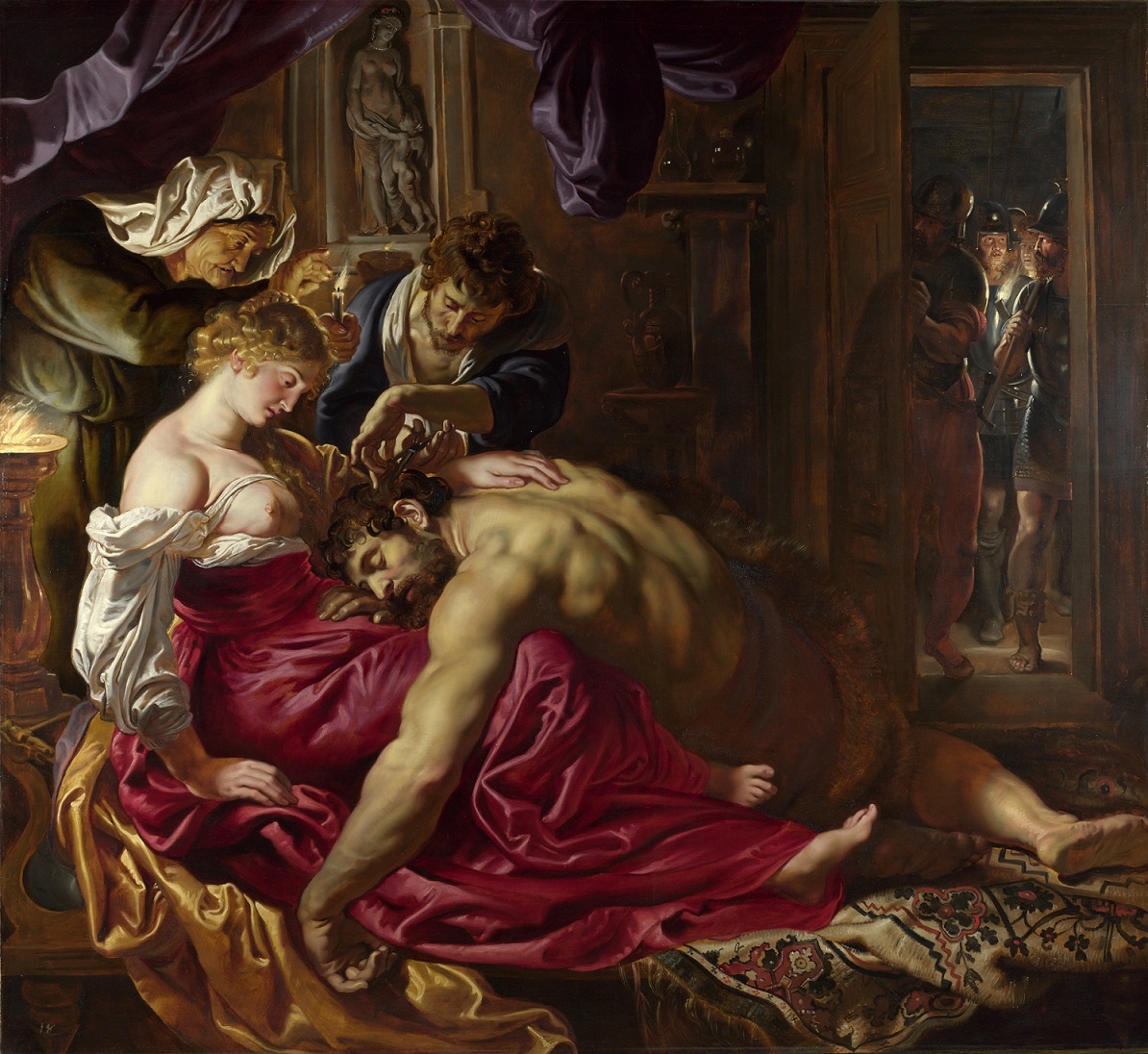 In the painting, the room is lit by the candle present on the left of the room. One can observe a lot of elements like perfume vessels, well embroidered clothes, statues of Venus and Cupid, etc. The centre of the painting is occupied by Samson and Delilah. Rubens uses the typical Greek figure to depict the body of Samson. He is shown with a toned body indicating his strength for which the Philistines want him dead. However, the sleeping Samson shows peacefulness through his face revealing his love towards Delilah and his complete trust over her.

Delilah is the brightest figure and probably the saddest as well, in the painting and is half naked. This shows that she has lured Samson with her beauty so that she can know the secret of his strength. But, her face suggests that she feels the guilt of her misdoings. This thought has probably arrived to Rubens from The Bible, where after letting the Philistines know about his secret several times, she immediately informs Samson about the entering of the enemies. It can also be observed that she doesn’t take part in removal of hair. She places one hand on Samson in a caring manner and the other hand is on the bed.

The person cutting the locks of Samson is shown with cross hands, indicating an act of deceit. The woman besides him holds a candle for the act and is shown as a wicked one [as she suits the description of a witch in the Middle Ages]. The Philistines are too afraid to come near Samson and stand outside with an expression of fear and awe.  One of the guards secretly watches the act while the others seem not to keen to involve themselves in ‘watching’ Samson.

The most unique aspect about the painting of Rubens is the presence of the statues of Venus and Cupid. Samson is often compared to Hercules, when it comes to strength and people believe that the story of Samson is created based on the myth of the Greek demigod. This clearly shows that Peter Rubens is in support of this theory. Moreover, the viciousness of the act is also shown through the expressions of Cupid, where his uplifted toes indicate that he is fearful of the incident and wants her mother to take him. Thus, Sir Peter Paul Rubens makes total use of the popular beliefs and The Bible interpretations to present the plight of Samson and Delilah.