Vincent van Gogh, the man who produced thousands of artworks and became a legend for future artists had a mental illness from which he suffered a lot during his last stages of life. In his last year 1890, either due to lack of inspiration or willingness to revisit a pencil drawing; he worked on the Sorrowing Old Man or At Eternity’s Gate.

“…the poorest woodcutter, heath farmer or miner can have moments of emotion and mood that give him a sense of an eternal home that he is close to.” This was the thought mentioned by van Gogh while he was about to work on the lithograph.

Worn Out is the name of the pencil drawing that van Gogh gave, when he drafted an old war veteran sitting on his chair. The war veteran and pensioner was Adrianus Jacobus Zuyderland, who modeled for van Gogh. The drawing was done at Hague at an almshouse where van Gogh was studying Adrianus in the year 1882.

In 1890, Vincent revisited the pencil drawing and created a coloured lithograph. Sad fact, Sorrowing Old Man was completed two months prior to suicide/death of van Gogh. The suffering that van Gogh faced during his life can be viewed through Adrianus bending on his chair with face covered. This is the point where van Gogh believed that human life surpassed all Theology and realized something high [God] without having any awareness of it. 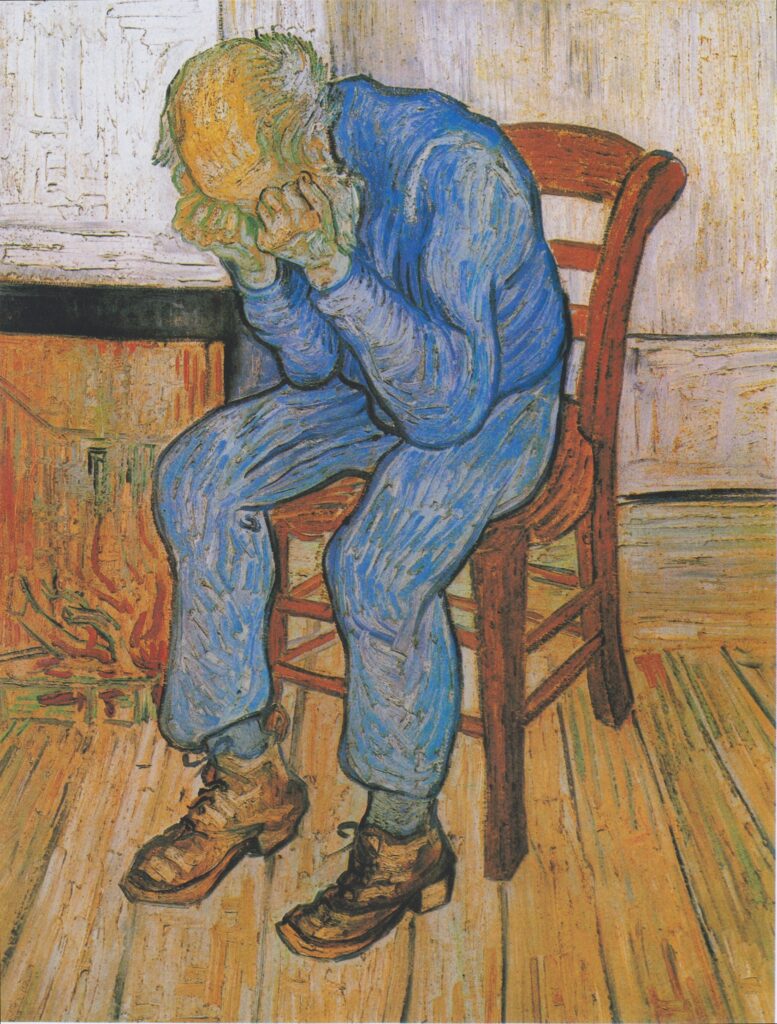 Worn Out, At Eternity’s Gate and Sorrowing Old Man [last one is a given title] show the weariness of life and how van Gogh depicted this work. In 1882, he observed Adrianus giving up all hope and sitting in a corner of his hearth. The original draft did not give him satisfaction as an artist and wrote that he wanted to work on it to produce a faithful reflection of what he has observed. Years later like the old man, van Gogh too was “worn out” with his mental illness and this was perhaps the motivation for him to create a lithograph from the original drawing.

Old age is viewed as a point where a person realizes his place in the Universe. After all the pains, struggles, sacrifices and fatigued experiences people often resort to being alone. During this period, sorrow plays a big role, as can be seen with the old man. He is alone, lit a fire in the background, probably ruminating the past and sorrowfully rests his face on his hands, while his hands are supported over the knees. The “sorrowing old man” is a depiction of anyone who is suffering and as there is no face visible almost anyone can identify themselves in the situation. Such tragic events can either lead to mental collapse [as in the case of van Gogh] or realization that all the worldly complications will slowly burn in the fire and there would be nothing but to stand “at eternity’s gate”. 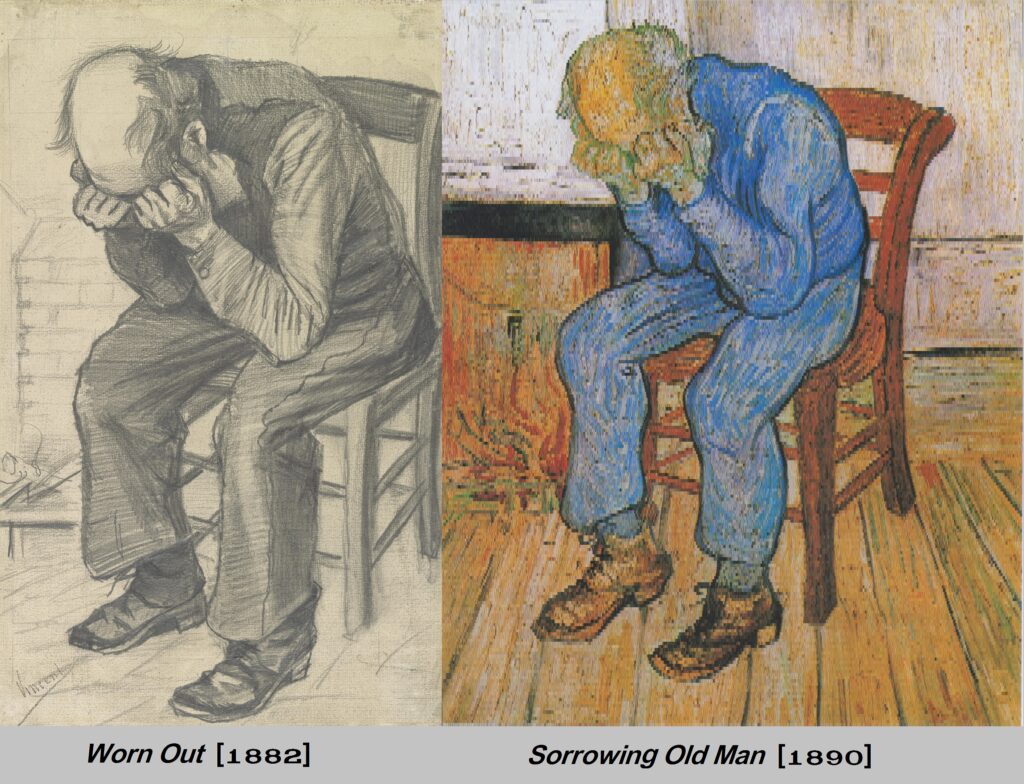 Unlike other van Gogh works where the canvas is filled with colours, there is a striking contrast between the old man and the background. Old man in the bombazine suit and the chair are brightly coloured as if Vincent van Gogh wanted to deliberately show the main subject without focusing too much on other details. The burning fire in the background is an indicative of the agony, desires that are burning inside the person. However, it can be never known if the flame is decreasing or increasing. The wall and the wooden floor are worn out just like the old man and are about to fall apart. Nonetheless, the old man has a choice to put out the flames of desire and select a faithful path that can lead him to gates of eternity. He can release his fists of anger and free his emotions; that can lead him to peace.

There is so much about Vincent van Gogh that one can understand through Sorrowing Old Man. His keen observation skills, theological beliefs and his inability to come out of the point of discomfort to seek peace. Unfortunately, his case was different and the mental illness slowly gave way to suicidal tendencies. The worn out, sorrowful van Gogh knew what to do to reach the gates of eternity; but, he could only see it and not enter it. His mind, as brilliant as it is, wrote another script for him.