Comedy, satire and wit are perhaps greatly dealt in word form than visual form. However, there are some artists who use all the aforesaid properties to paint the most beautiful or the most ugliest of paintings to create a bright/dull sense of humour. Quentin Matsys, 1466 AD to 1530 AD, was one such brilliant personality whose paintings were classic in their own way and yet completely different from what was expected from the artists of those days. The Ugly Duchess or A grotesque Old Woman is a fine example of his mastery over painting and wit.

The Ugly Duchess was done over a span of years and is believed to complete in 1513. The painting is a stark contrast to the Renaissance art that bloomed of beauty and tried to demonstrate the greatness of art through vivid depictions. A grotesque Old Woman, on the contrary depicts a woman who is deformed holding a rose bud.

For centuries, Quentin Matsys is accused of copying the art work of Leonardo da Vinci. The two caricatures found with the drawings of da Vinci are very similar to The Ugly Duchess and the blame immediately went to the lesser known artist. However, recent studies found that Matsys and da Vinci exchanged art work. Interestingly, it was either da Vinci or his disciples who copied from Quentin to draw the caricatures. To support the theory, evidence was found that Quentin Matsys made several amendments to the original and this can be only done by artists who have access to the subject. 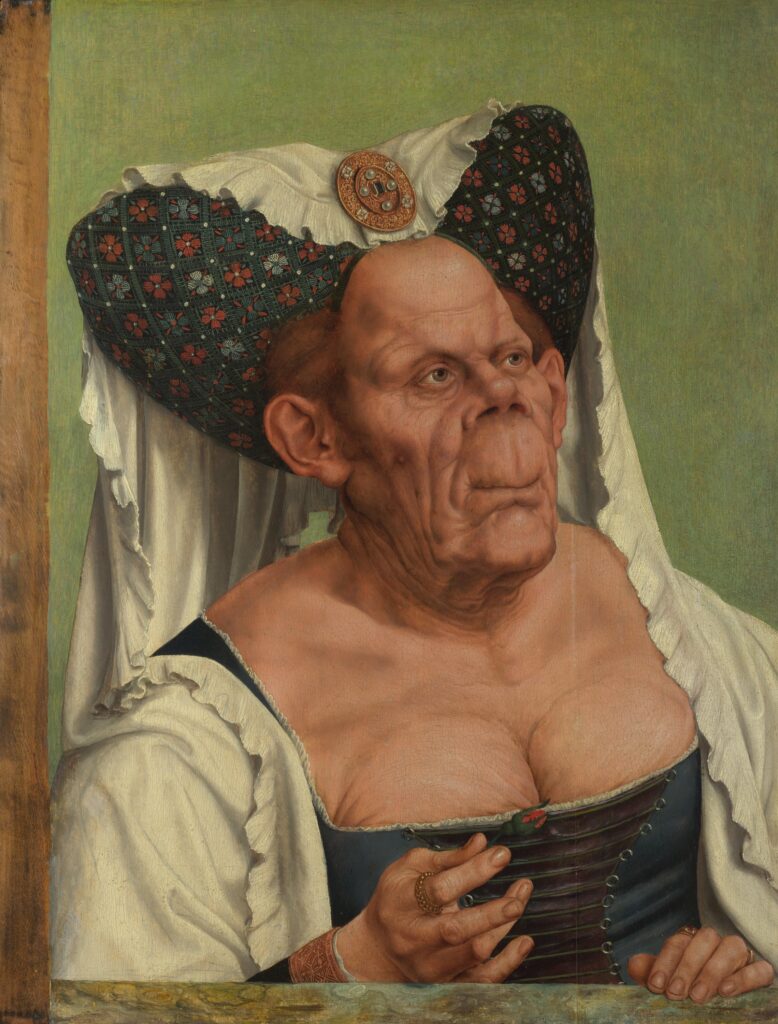 Quentin Matsys – The Ugly Duchess or A Grotesque Old Woman

A Grotesque Old Woman has two standout analyses – one that everyone thought was true and the other revealed a decade ago which is the truth.

The old woman in the painting is a cougar who is trying to behave like a young girl showing her beauty to attract suitors. She holds a rose in her hand symbolizing love and romance. Matsys might have been mocking the slightly elder women of Renaissance who felt that they were young and attract young men. However, the rose she held in her hands is un-bloomed meaning that such exaggerating attire will not attract men and the cougars assumptions can never come true.

The saggy flesh exposed by the women through her dress and horn like headdress appear as if she is possessed to get a suitor despite her age. The Ugly Duchess in the painting is portrayed as such that Matsys clearly wants the women in his time to understand that women should realize their age and behave appropriately.

This analysis, on the outlook seems a perfect fit. However, there are few objections to this theory. The main reason being the unnecessary use of fine detail in a painting while the purpose of the artwork is to mock the Renaissance women. A simple sketch or a painting with fewer details might have sufficed. So, this analysis is contradicted by another that was supported by recent research.

During the 14th century, there lived a Duchess who was nicknamed The Ugly Duchess, bag mouth, satchel mouth, etc. Her name was Margaret, the last Countess of Tyrol. She could have been an inspiration to Quentin Matsys to draw the painting. Researchers claim that Matsys took her as the subject or as an inspiration to draw some real life person [during his period] for commission. The subject seemed to suffer from Paget’s disease which deforms the body [in this case upper body] and makes one appear out of sorts. This discovery was made by a professor of surgery, Michael Baum and his team. This theory got a lot of support because Matsys depicted the person with so much detail, as if he wanted to study the subject without letting anything go.

For Matsys or the person who commissioned the painting, witnessing a rare disease would have frightening yet novel. Therefore, they might have wanted to create an art work to leave it as proof for generations that such unfortunate people exist. However, Matsys does not portray the women with vanity, she has a dignity lifting her head up and holding a ‘to-be-bloomed’ rose bud indicating that there is hope.

So, there are two ways to look at The Ugly Duchess, either is she a repulsive person still hoping for young men or an inspiration who posed for the painting to show future generations that deformities cannot stop someone to be noble/fair/confident. It is up to the viewer to hate A Grotesque Old Woman or love The Ugly Duchess.

3. Illustrations of the Duchess by John Tenniel for Alice’s Adventures in Wonderland.