Vincent Van Gogh is considered as the most talented Post-Impressionist painter. However, this claim was bestowed upon his works after his death at an young age of thirty seven [37]. Van Gogh was treated by people as a madman. But, he got recognition through his wonderful paintings after his death. Now, Gogh’s paintings like ‘The Starry Night’, ‘Irises’, ‘The Potato Eaters’, ‘At Eternity’s Gate’, etc. are amongst the best art works in the world.

The Potato Eaters was completed in the year 1885 and is one of the finest works of Vincent Van Gogh. The painting was inspired by the lives of peasants in Neuenen, Netherlands. Van Gogh lived with them for some time and intended to present the painting with truthful rendering. The Potato Eaters shows the simple nature of life and how laymen go about things. It shows five people who are dressed alike and gathered to have dinner. Van Gogh explained in a letter that the peasants work hard to dig out the potatoes and bake them for their food. This explains that his intention was to show the hard work put by the peasants to earn their daily living and their mechanical life in the fields. 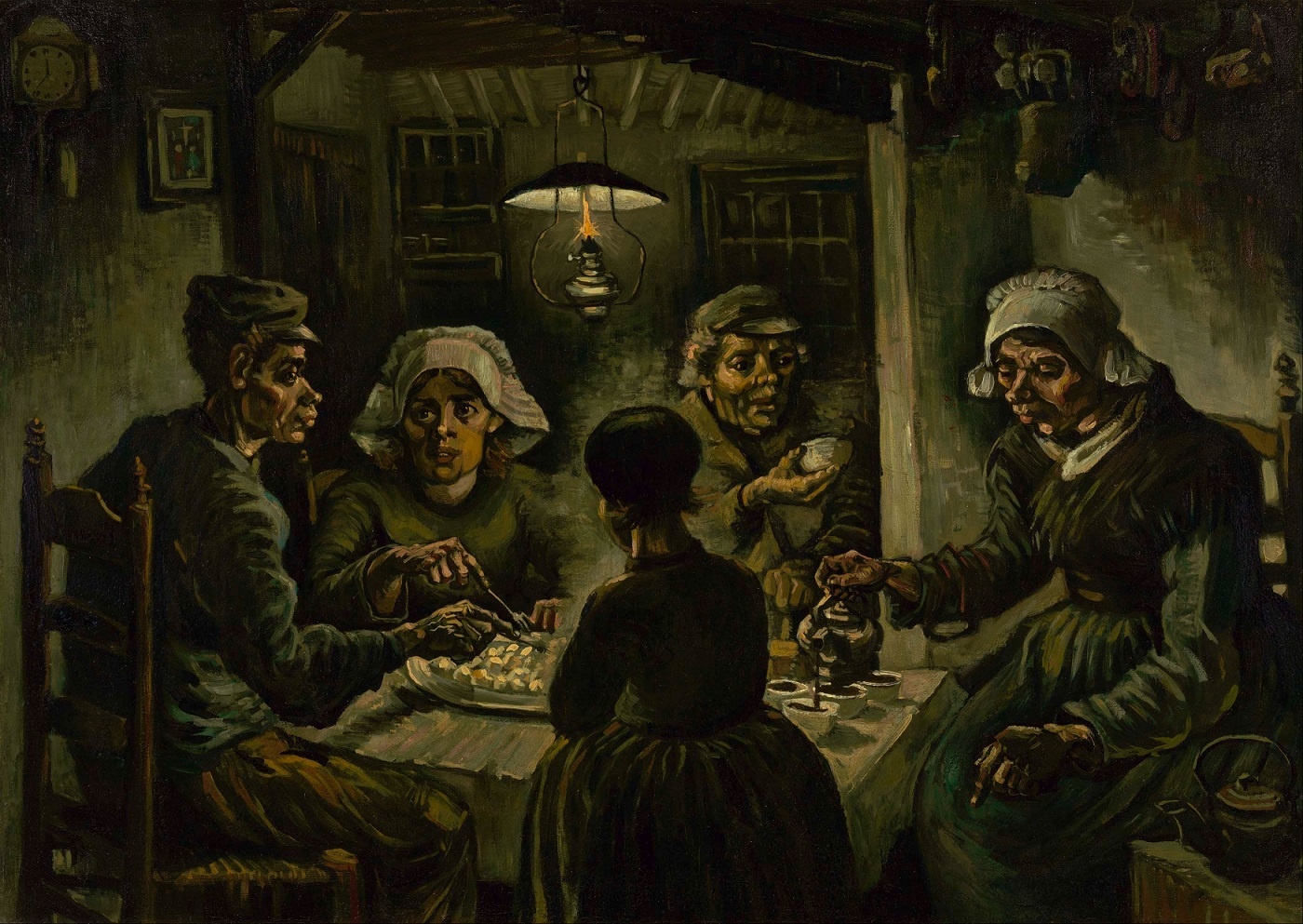 The Potato Eaters is a simple depiction of farmers who are only concerned with sweating it out in the farm so that they can provide food for themselves and others. The lamp is the single light source, which was the case for many farmers in the 19th century.  The four faces visible show no novelty or surprise and look as if they are performing a daily routine. The hands are not muscular and their forms are not attractive. This shows that the peasants are not enjoying the pleasures of life; instead they are living it for the sake of living.

Van Gogh uses kettles, portrait with a Cross, regular cups, etc as main objects to show the accustomed lifestyle of peasants. The clock depicted in ‘The Potato Eaters’ earns a great significance after the main objects. The time displayed is very late showing that the peasants had to work very hard and late to earn their food. Although, they are having potatoes and coffee the life of peasants never is a walk on flowers. The pale faces and eyes of the people are matched by the drab colours used in the background. The painting is completely natural in the use of colours to the depiction of the people.

The Potato Eaters by Vincent Van Gogh is a very intense painting that tries to show the adversities of peasants who are indulged in their daily routine. The down to earth subject displays to the world the hardships of people who depend on soil for a living. The painting also shows how Vincent Van Gogh felt about the life of the peasants with whom he lived for some period. His painting is a message to the world that the peasants need more respect and happiness in their life than they actually are getting.