Saturn is a Roman mythological figure who has inspired several artists throughout the world. Apart from literature and writings, many artists took the story of Saturn to interpret visually through their works. Peter Paul Rubens and Francisco Goya are the finest examples of taking the cannibalistic nature of Saturn and interpret it through their paintings. Both the paintings are called as Saturn Devouring His Son and both are horrific yet true to the nature of Saturn.

The Myth of Saturn

Saturn was born to Caelus [the sky god] and mother earth. He was frustrated by the tyrannical rule of his Father and defeats him to become the chief deity for the world. One day he listens to a prophecy that a child born to him will dethrone him. Saturn was married to the goddess of fertility – Ops and he devoured every new born the moment they were born. He devours Ceres, Veritas, Vesta, Pluto, Neptune and Juno. Ops concerned about losing another child – hides her sixth born Jupiter and gives Saturn a stone wrapped in clothing. Saturn believes that he ate the child; however, he survives and dethrones his Father as predicted in the prophecy.

Saturn leaves to Latium and introduces to the people the methods of agriculture. It was believed to be the time of the Golden Age for Latium when Saturn ruled. The myth of Saturn is similar to that of the Greek myth of Cronus; but, the major difference is the addition of the Golden Age by the Romans giving Saturn a superior place amongst the Roman deities.

Rubens, the Flemish artist, is renowned for his mythological paintings. His works such as Samson and Delilah, Venus and Adonis, The Birth of Milky Way, etc. have brought him fame all over the world. The painting Saturn Devouring His Son was completed in the year 1636. The painting shows that it was done under the influence of two people – Michelangelo and Galileo.

Galileo with the help of his telescope discovers Saturn and two other stars aligned close to it. It was later found out that they are not stars, but the rings present around Saturn. The painting shows clearly the central star Saturn and the other two. This indicates that Rubens had faith in the scientific development of the age, rather than dismissing the discoveries of Galileo.

Saturn is holding a sickle, which shows him as the deity of harvest. However, Rubens cleverly uses the long handle of the sickle and makes it appear as a scythe, which is the weapon of the Grim Reaper. An indication that Saturn has turned into death for his children and his face shows no mercy at all. The child suffers from the ripping of flesh, but Saturn seems obsessed with his throne that he doesn’t care for the life he gave. There is no hope for the child and there is no remorse in the eyes of Saturn, making this painting the closest of all interpretations of Saturn devouring his son.

Francisco Goya, the Spanish artist, is renowned for his works of horror and consequences of war. During the timeline of 1819 to 1823, Goya focussed on dark paintings and the art works of this period were called as Black Paintings. Saturn Devouring His Son was completed during this time period and there is no certain date associated with the completion of the painting. It was not done on canvas, but Goya painted it on the wall of his house as a mural using oils.

Goya had a house called as the Villa of the Deaf Man, in which he painted 14 works. All the works are dark and were painted on the walls. Goya never meant those paintings to be made public; therefore, one can observe that there are no finishing touches or efforts for improvisation. The particular art work Saturn Devouring His Son was placed in the dining room along with other ‘black paintings’. Further, the name for the work is not given by Goya and it was later inferred that the image resembles the Roman myth of Saturn. 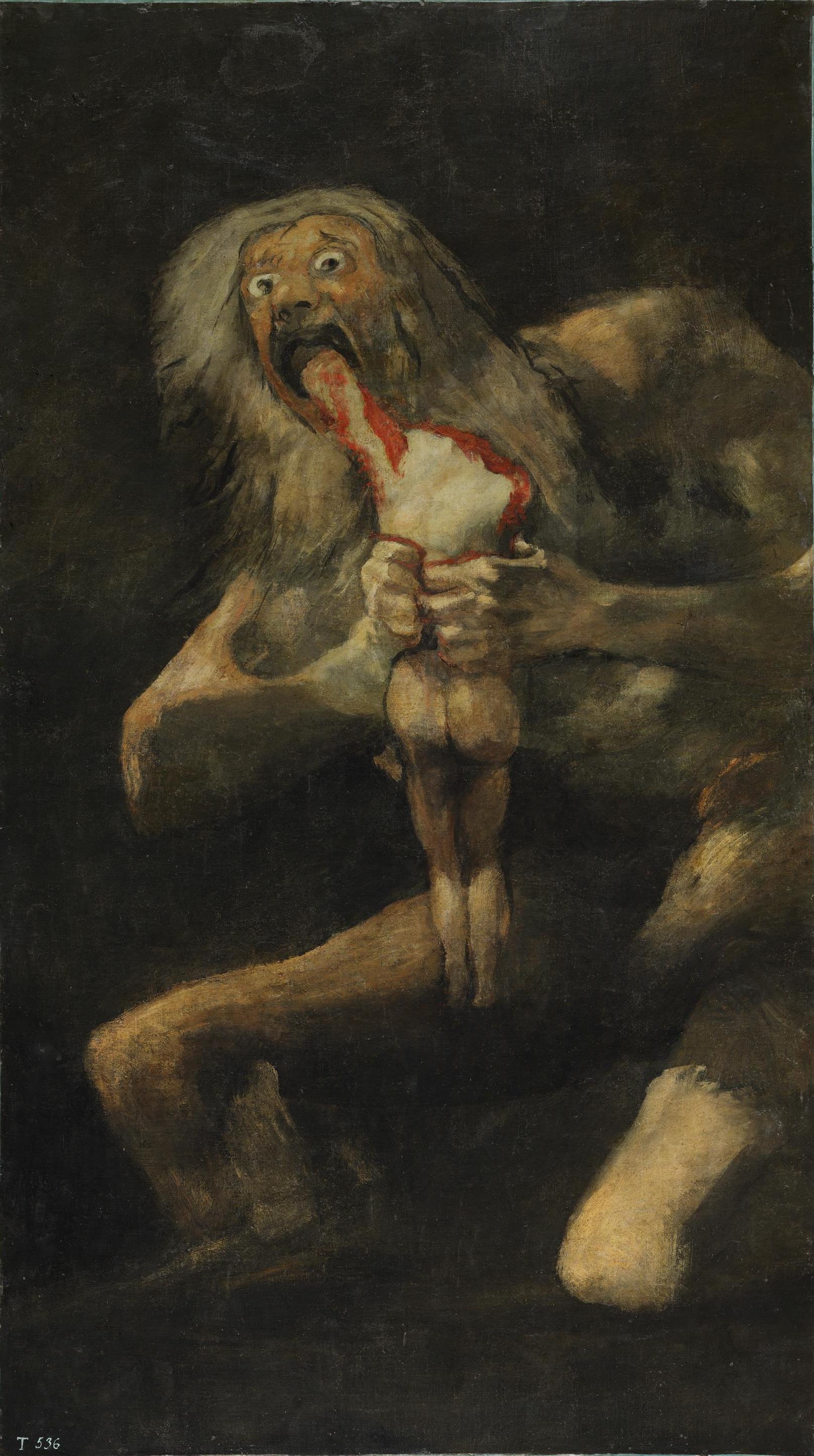 The depiction of Saturn in the painting creeps out the viewer as the central figure appears psychotic and has a pure cannibalistic instinct while eating his son. There is no remorse, regret or any emotional variance except for a demonic demeanour of a person lost in the blindness of power. The mythological description shows that Saturn ate his children when they were very young, but Goya presents a grown individual in the hands of the devourer. Goya has witnessed war and strife in Spain during his lifetime and some interpretations note that the central figure is death or war and Spain is being devoured because of the dark presence. So, the use of a grown individual adds a historical depth into the painting.

One must note that Saturn Devouring His Son by Goya is not the first painting he did on the subject. In fact, he made sketches [1796-1797] of the subject many years before he painted this one on the wall. The former was much more subtle with Saturn holding a child in his left hand and eating a child captured in his right hand. But, the level of ferociousness found in the mural is absent in the sketch.

When it comes to comparing both these masterpieces, Rubens has approached the subject in a more traditional manner, whereas Goya has done it in a remarkably dark fashion. Nonetheless, one must observe that the Saturn of Rubens is in complete consciousness while devouring his son and is aware of the wrong-doing. On the other hand, the Saturn of Goya is completely lost in the abyss and his maniac actions were not done with the full awareness of the consequences. So, it can be said that Saturn Devouring His Son by Rubens has provided Saturn in the rightful manner, whereas Saturn Devouring His Son by Goya has provided Saturn with a distorted psychological state. In comparison, both the painters have given two different interpretations on the subject; hence, are considered as masterpieces of art.