Kabir Das is a saint and mystical poet of India belonging to the 15th century. He did not believe in idol worship and felt that God is within the individual. Bhakthi movement, which he followed to the core, believed that oneness can be achieved through devotion of the self to the Supreme Existence. This “existence” can take name of any; for example Rama, Krishna, Zeus and so on. His method of propounding oneness is through a mixture of Hindu and Islamic philosophies. Go naked if you want is a poem that reflects the same and in every line there is a clear message from the saint to the readers.

Go naked if you want summary

Kabir takes Ram as the Supreme Existence in the poem and implores the reader to understand the true meaning of theological doctrines.

According to the poem, one does not become a saint by merely going naked, putting on animal skins – all these do not matter if the individual cannot understand his connection to the Ram present within him.

Yogis who roam around think that it would help them to transcend, but Kabir says that, deers are better at roaming the forest and they are the ones that would be saved from the circle of life.

Some people shave their heads with thoughts that a shaved head will help them be more spiritual; for that Kabir counters that if shaving was a criteria sheep that often get a complete shave would be in Heaven.

Leaving family life & deciding not to reproduce are considered as objectives for Yogis who want to earn a place in Paradise. However, Kabir claims that eunuchs who are incapable of reproduction would be first choice to reach Paradise.

Finally, Kabir concludes that without realizing the true nature of customs and doctrines, without understanding the existence of Ram in the individual no one could reach enlightenment. 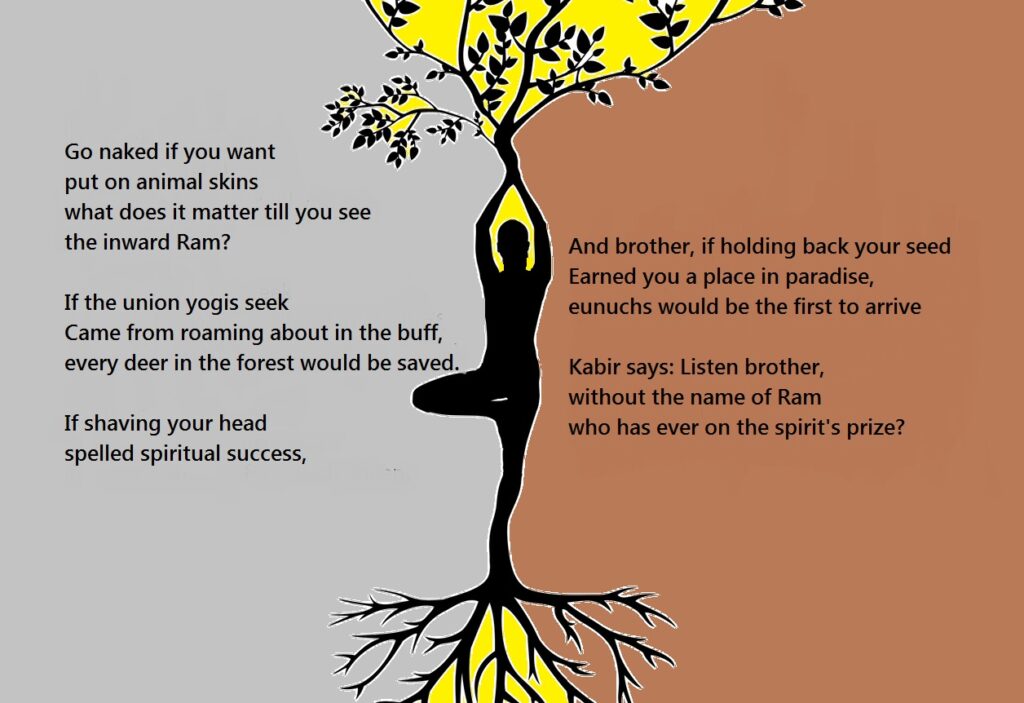 The philosophy of Kabir

Kabir’s philosophy was simple – divine existence can be found everywhere. If one wants to find a connection between the self and the Supreme manifestation he/she has to look within. The name given to the manifestation does not matter; it can be Ram, Allah or any other name given in religious texts. However, Kabir believes that one has to develop a deep devotion to that name in order to understand the Supreme existence eventually leading to oneness. Kabir was a disciple of Swami Ramananda, thus he was attached to the name Rama. For Kabir, Rama is the Supreme manifestation through which he could attain enlightenment. Go naked if you want shows the same and he instructs the reader to find his/her inner Ram rather than following the rules without properly understanding them.

Go naked if you want analysis

During the 15th century, there was a lot of unrest among the people. Religious leaders were trying to capitalize on the situation and tried to increase casteism rather than calming the storm. Kabir was completely against these acts by Hindu and Islamic leaders.

One can clearly ascertain that merely preaching what is in the religious doctrines does not make people good and godly. Appearing like saints wearing animal skins, wandering as vagabonds, shaving heads to appear divine, etc. will not make people close to the Supreme Existence.  The purpose of all the acts mentioned in the poem – Go naked if you want – is to sacrifice the desires.

Desires for the worldly will deviate the person from the goal of transcending the self. If enlightenment was as easy as one would attain it through appearances then everyone would be in Heaven. Therefore, Kabir exemplifies that appearances for the sake of it will not help.

There are beings created that are more effective rather than beings that try to pretend as others. For example, Kabir says that deers are better suited to roam in the forest than men. This shows that men who believe that roaming in the forest would grant them a seat in Paradise would not do well; because, deers are more deserved in playing that part. So, what should a person do in the forest? He/she must meditate, try to be in unison with Nature and realize the relation between his/her existence and the Supreme Existence. This is the process that requires patience, tolerance and devotion to God [Ram in the poem].

Devotion may sound simple like appearances but takes a lot of resolve to go forward. A simple mishap will lead to distractions as can found throughout the history. Hence, Kabir questions in the end what could one achieve without realizing the inner Ram? It is a clear question but requires faith, wisdom and oneness to answer. Go naked if you want is a critical, transparent poem that hides nothing but asks the reader to realize everything about the Self.