Munshi Premchand is the pen name of the famous Hindi-Urdu writer Dhanpat Rai Shrivastava. Considered as the emperor of Indian novelists, he has written more than twelve novels and hundreds of short stories. Deliverance by Premchand is among those short stories originally written in Hindi and translated to English. The original title of Deliverance is Sadgati, which means salvation or deliverance from the worldly and attaining the transcendental state where there is no rebirth.

The short story, Deliverance by Premchand is a criticism on the Hindu society where the Caste system rules the society above all rules. The title may portray a positive movement within the story; but, the protagonist finds everything in life difficult and his ending is not “transcendental” at all.

Dukhi is a tanner who is looking to set a date for his daughter’s engagement. He and his wife Jhuria clean the house; plaster it with cow dung, to ensure the priest [Pandit] would find it comfortable. They find themselves in a tangle when they realize there is no cot for the priest to sit. Jhuria offers to get them from Thakurs of the Kaistha caste. Dukhi gets infuriated by the impossible thought and chides his wife for even thinking about Thakurs offering them anything. In the end, they decide to clean their own cot but have doubts about the priest sitting on it.

To compensate for the cot, Dukhi thinks of making leaf plat from the leaves of Mahua [Madhuca longifolia]. These leaves are considered pure; as, Dukhi was about to make a plate, Jhuria offers to make the plate. She asks him to go the Pandit at once and reminds him about offerings presented to the priest when he visits. When she asks about placing the offerings in a plate, Dukhi says a leaf plate would be better. He warns Jhuria to not touch anything.

He asks to take either the Gond’s daughter or Bhujin to buy the offerings. Dukhi reiterates his words and says to not touch anything. He specifies the offerings – “One seer flour, half seer rice, a quarter of lintels, ghee, salt, turmeric” and a four-Anna coin.

At the Pandit’s House

Dukhi picks up a bundle of grass as a present to the priest – Pandit Ghasi Ram. He thinks highly of the priest and considers him [and the Brahmin caste] as people of God. Dukhi waits for the arrival of Ghasi Ram who follows a strict time for rituals/prayers. As the priest enters outside, Dukhi immediately stands up, lies down flat on his chest, stands up and folds his hands in reverence. The priest inquires about the presence of the tanner. 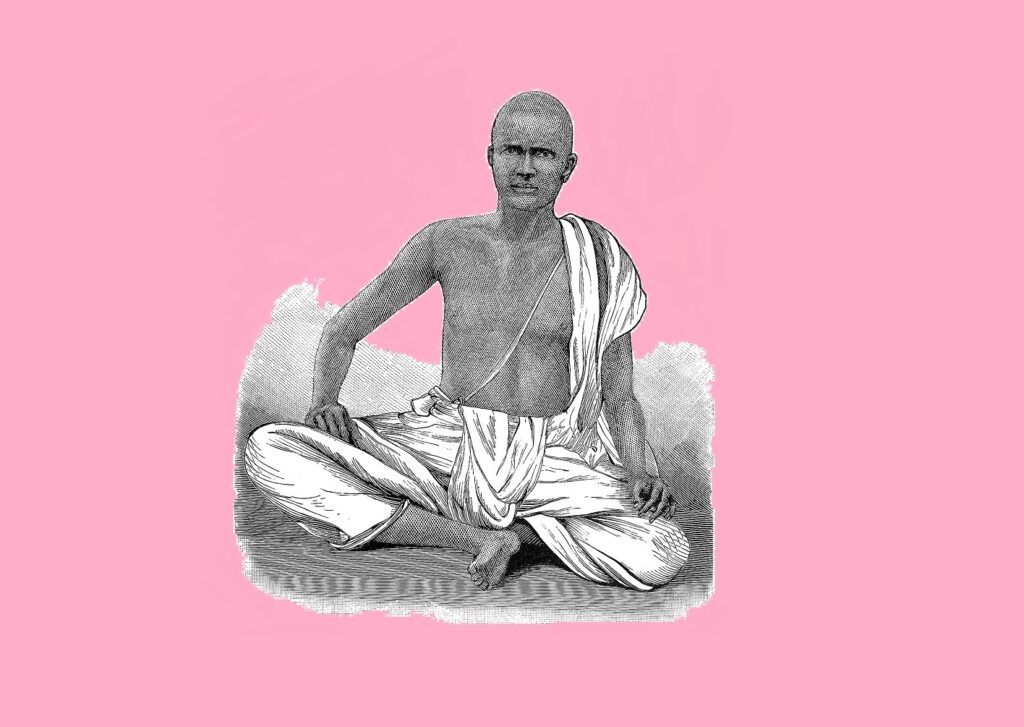 The tanner explains why he had to visit and the priest says he would come by the evening to fix a date for engagement. Dukhi asks about placing the grass bundle. Pandit says to keep it near the cow and gives him errands till evening. Ghasi Ram asks Dukhi to sweep the door, plaster the sitting room, bring four sacks of straw from a field and chop wooden log.

He immediately resorts to work and completes sweeping and plastering. It was already noon and Dukhi who ate nothing since morning was hungry. However, he could not go to his home as his absence would madden the priest. So, he starts working again and tries to chop the log. The log having a thick knot refuses to break despite severe effort by Dukhi. He becomes annoyed, sweat drenches his body, axe would slip and his breath would go out of grasp yet the log does not part.

Dukhi feels that having tobacco would regain strength. He asks Gond for tobacco and tries to obtain fire from the house of the pandit. Without thinking of the consequences, he rushes into the house of Ghasi Ram and asks for fire. The priest’s wife gets furious with the presence of a tanner in the house. Dukhi realizes his mistake, “how can a chamar (tanner) enter a Brahmin’s house!” After chiding and cursing, priest’s wife throws burning wood near Dukhi. He sincerely apologizes for his unholy act.

A splinter from the burning wood falls on his head and he shakes it off.  Dukhi feels that it was the punishment he deserved for entering a Brahmin’s house. His respect towards Brahmins increases with this act of God.

After a while, the priest’s wife observes that Dukhi is working hard to pierce the log. She asks her husband about giving any food. He says that he would eat rotis made out of a seer of flour. Astonished, she doesn’t want to give Dukhi any food.

Despite his hunger, Dukhi starts to axe the log. It does not break. Eventually, Chikuri [friend from the Gond caste] comes to the house and he offers help. However, he too cannot break the wood and explains about the knot. Chikuri enquires about food; Dukhi says he cannot digest the food of Brahmins. Chikuri is upset with the fact that he is working hard and has not been given food. Dukhi calms him down as he is afraid Ghasi Ram might overhear their conversation.

Chikuri leaves and Dukhi  goes to bring the sacks of straw as he was unable to break the wood. He brings the sacks in two efforts [two sacks at a time] and falls asleep tired. Pandit wakes up to find Dukhi sleeping near the straw and the wood uncut. He shouts at the tanner for not taking care of the wood. Dukhi wakes up and grabs the axe to make a final effort. In the presence of the pandit he could not feel anything and starts to hit the wood. The tanner was afraid that if the priest is angered, he might set an inauspicoius day for engagement.

As if some mysterious force was driving him, he gave all his strength to the axe. For half an hour he repeatedly struck the wood. He felt the words of Brahmin were giving him power. Finally, the knot breaks and the axe falls from the hands of Dukhi. Dukhi too falls down out of exhaustion and becomes unconscious.

Pandit Ghasi Ram tries to wake him through voice but the tanner remains unmoved. Not intending to trouble the tanner, pandit goes back into the house to get dressed to go to the tanner’s house. Even after coming back ready, Dukhi still lies unconscious. He observes that the tanner’s body has gone stiff and tells his wife that he might be dead.

Pandit frantically asks his wife about dealing with the dead body of Dukhi. She says to inform the tanners and they will take care of the rest. In no time the news spread and Brahmins of the village decide to stop using the road that led to the well. This road is connected to the pandit’s house and they feel that it is a sin to witness the dead body of a tanner.

The Gond friend, Chikuri, warns the tanner cost to not touch the body of Dukhi. He emphasizes that Dukhi has been killed by the Brahmin and it is a police matter now. Ghasi Ram tries to pursue the tanners to lift the body. No one dares to touch Dukhi. However, Dukhi’s wife and daughter approach the pandit’s house to cry and mourn over the death.

They keep crying till midnight and the pandit’s family find it difficult to sleep. But, a Brahmin cannot touch the corpse of a tanner – it is against the laws laid in holy texts. Irritated by the helplessness of the situation, Ghasi Ram curses the women outside in front his wife. He calls them she-devils and vampires. The priest’s wife tells that having a tanner’s dead boy in the house is not good.

Dukhi’s body began to stink in the morning. As no tanner came to take the corpse Ghasi Ram decides to remove the body. Early morning he makes a loop to tie around the feet so that he need not touch the corpse. After carefully tightening the loop he drags the corpse out of the village into the fields.

Pandit returns home, takes a bath, recites prayer and sprinkles Ganges water in the house for purification. Meanwhile, Dukhi who had great reverence towards Brahmins gets eaten by wild animals and birds.

Deliverance by Premchand is a direct criticism on the caste system in India. Once, a very noble system degraded because of human greed and politics. The result is bifurcation of people based on greatness and position in the society.

Dukhi who absolutely worships the Brahmins and fears them finds death in a Brahmin’s house. Whereas the people he worships treat him like a person who committed sin.

Pandit Ghasi Ram lives his life as an prideful Brahmin and doesn’t fetter even with the death of Dukhi. He neither touches the body nor feels sad for someone who is dedicated to serve. Priest’s wife is the same and so are other Brahmins in the village.

Chikuri, an archetype of socially aware individual, tries to put the Brahmin family under trouble through police. He opts to help the tanner but nothing works. He is as struck in the vicious web of the caste system as others.

The title Sadgati or Deliverance is justified as Dukhi gets salvation from the notorious caste system. His life as a tanner was equivalent to being a prisoner. He had to beg even for fire and he will be cursed at for such a trivial matter. In the end, one feels happy for Dukhi for he obtained deliverance from the worldly struggles. However, many questions are unanswered and left for the imagination of the reader:

Will the Brahmin family be punished?

What will happen to the wife and daughter of Dukhi?

Will there be an investigation from the police?

Can Chikuri avenge the death of his friend?

Will the village transform into an ideal one after the death of a tanner?

There are many such questions that arise at the end. For all these, the answer would be NO. Nothing goes beyond the caste system and everything will go as routine.