Giotto di Bondone or Giotto or Giottus, was a painter from Florence, Italy belonging to the late middle ages. The Byzantine style of painting adhered by most painters of the age is modified by Giotto as he mixed his own imaginations into the norms of Byzantine painting. The result is a mixed form of art that reflected the Byzantine style with a touch of realism and use of depth. Giotto’s Exorcism of the Demons at Arezzo is a fine example of his mastery towards the elements before mentioned.

Background of the painting

Exorcism of the Demons at Arezzo is painted by Giotto as a part of commission to represent the story of St. Francis in the Basillica of San Francesco d’Assisi in Italy. In a total of twenty eight scenes that represented the life of St. Francis, Giotto painted twenty five and this painting is the tenth of the twenty eight scenes found in the Basillica and was completed in the year 1299.

Saint Francis visits Arezzo and realizes there are demons haunting the city and enforcing people to kill each other. To cast out the demons, he sends Father Sylvester to perform exorcism. As Father Sylvester performs the rites, people hear that it was Saint Francis who sent the Father to help. With the exorcism successful [a miracle], people realize the greatness of God and Saint Francis. 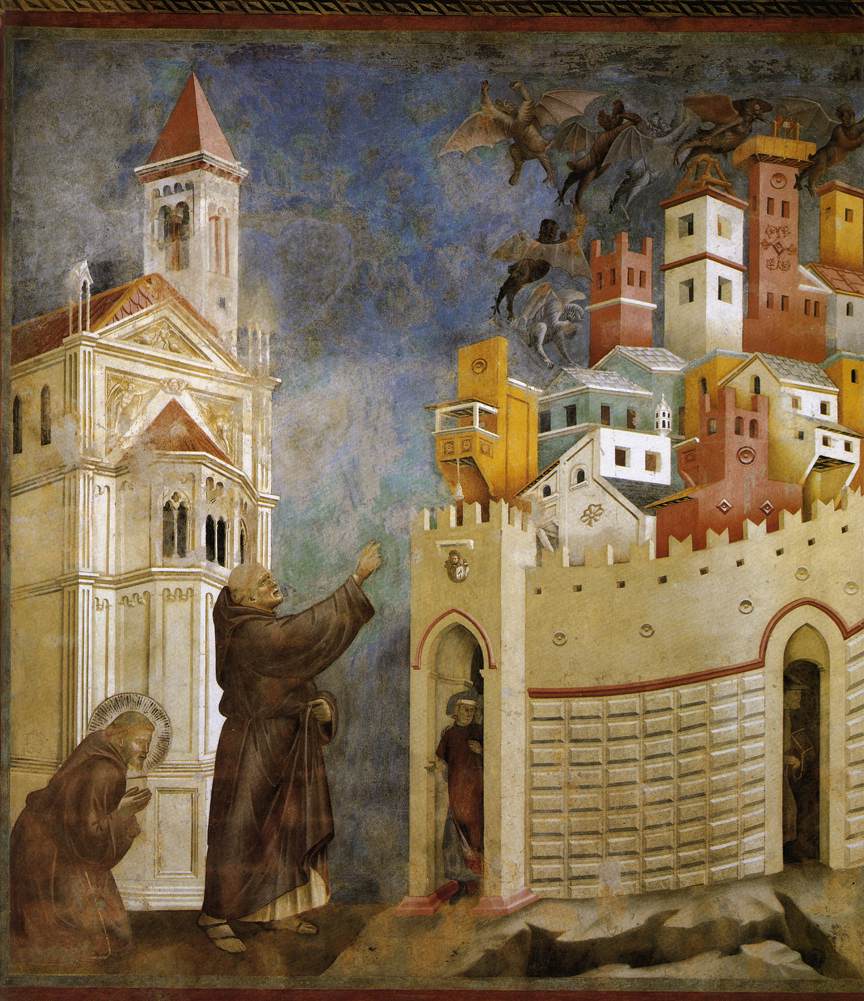 Exorcism of the Demons at Arezzo analysis

The painting can be divided into four parts – Saint Francis praying for the welfare of Arezzo, Fr. Sylvester casting out demons, demons fleeing from the restored city, people coming out of two gates of the city.

Saint Francis is seen praying near the Church and is with a heavenly halo surrounding his head. On the contrary, Fr. Sylvester does not have a halo yet he seeks to remove the demons from the city. It can be understood that St. Francis has sent Fr. Sylvester for the exorcism of demons at Arezzo. The reason being, only priests are allowed to perform exorcism according to the rules of the Church. Despite having the heavenly blessings, St. Francis never chose to become a priest; whereas, Sylvester is an authorized priest of the Holy Church. However, one can notice the symbol of faith i.e. the church, is more in line with Francis than Sylvester suggesting that faith in God is more important than getting honours from the Church authorities.

Fr. Sylvester is shown as a representative of the Church and the people of Arezzo, with his inclusion between the Church and the city. He is determined to cast out evil and is seen reciting prayers for exorcising the demons. His strength to withstand such horror comes from St. Francis who is in constant prayer to provide support to Fr. Sylvester. Their effort works and the demons are seen leaving the city from the sky.

The architecture that was destroyed, indicated by the ground that is torn apart, by the demons is restored and demons of all kinds are seen flying above the city to make their escape. This is the part where Giotto strays from the byzantine tradition and paints demons in different colours. In general, byzantine paintings depict demons in a dark colour indicating their maliciousness. The seven demons in the painting are the cardinal sins and their characteristics are shown through the colour.

“Make every effort to enter through the narrow door. For many, I tell you, will try to enter and will not be able.”

Giotto seems to have used these lines to represent the gates of the city – one broad and one narrow. During the 13th century, as is today, there was a distinction between the rich and the poor. The rich looked down at the poor and the poor always struggled to get on the good side of the rich. Giotto, as were other painters, was considered as craftsmen incapable of attaining a noble status. The last part of the painting is a criticism on society where the rich are shown to leave from the broad gate and the poor from the narrow gate. This, however, is a general view as there are rich who are good and poor who are evil in thoughts.

Giotto’s Exorcism of the Demons at Arezzo is a complete painting showing all the social, theological and architectural elements in one canvas. It looks ordinary for the onlooker; but, analyzing the painting reveals a great depth and the knowledge Giotto had over the subject.