Aristophanes, the Father of Comedy, is well known to the world of literature through his eleven extant plays. He is believed to have written forty plays in his lifetime and all of them are in the form of comedy, generally referred to as Old Comedy. He had so much influence through his plays on contemporary politics and for this reason some of his plays are considered as slander by Plato, Cleon, etc. The play Peace was staged in the year 421 BC, during which there were expectations of the end of Peloponnesian War and the attainment of Peace of Nicias.

As the Old Greek plays were performed during competitions during celebrations or occasions, Peace was also staged the same. It is said to have won the second prized during such staging at the city of Dionysia. The active leader of Athens – Cleon, is satirized in the play and this has been done only after a few months of the death of Cleon. It shows how Aristophanes was fearless in expressing his ideas despite the situation and consequences.

Aristophanes Peace is not divided into Acts and the subheadings found in the following interpretation are only for the convenience of the reader.

In front of the farmhouse of Trygaeus two servants are seen preparing cakes of dung to feed a dung beetle. They gather dung from different sources and are utterly frustrated with their work. The second servant asks the audience about a place where a non-perforated nose is sold. They call the dung beetle whom they feed as a ‘voracious brute’. Slowly, they revert from the beetle to the predicament of their master Trygaeus who is acting mad and always talks about the dire situation of Hellas [Greece]. 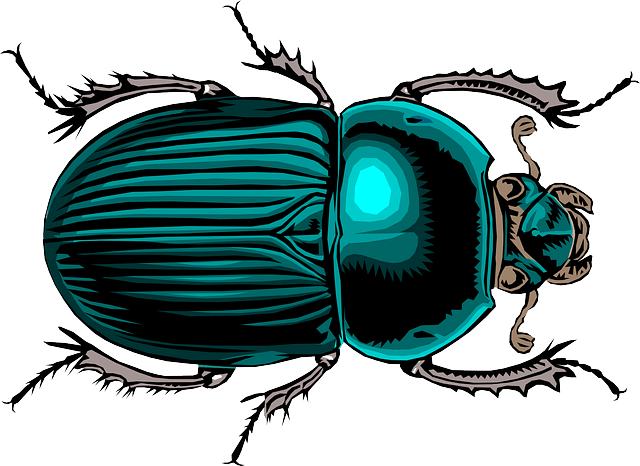 As the servant speaks, the voice of Trygaeus is heard from behind feeling anguished about the draining of lifeblood from the cities of Hellas. He is on the dung beetle and tries to control the flight of the creature as his servants implore to stop his madness. However, he expresses his desire to visit Zeus and ask him about the fate of the people in Hellas. The servants call for the children of Trygaeus as an effort to stop him. But, he doesn’t listen and flies towards the sky on the dung beetle.

Aristophanes uses the dung beetle rather than a more intense creature to display his sense of humour. However, he backs his thoughts with a reference to Aesop who says that the dung beetle “is the only living thing with wings that ever reached the Gods”. The intellectual abilities of the playwright are shown when Trygaeus is countered by his daughter by referring to Euripides. She asks her father to be careful otherwise he will become another tragic hero Euripides can use to write his plays. Such conversations show that Aristophanes Peace is not just about some insane comic elements, but also clever conversations involving great minds when appropriate.

The encounters of Trygaeus – Aristophanes Peace

In Olympus, Hermes identifies the scent of a human and questions about the presence of anyone. He sees a man on a beetle and calls him as a shameless miscreant. Every inquiry made by Hermes goes in vain as Trygaeus uses the word ‘miscreant’ used by Hermes as an answer. Finally, Hermes threatens to end the life on Earth and the man reveals himself as Trygaeus – “no sycophant, no lover of disputes”. Hermes asks the reason for his presence in Olympus and Trygaeus says that he wants to see Zeus.

Hermes answers that the Gods have left Olympus and have made him stay for some errands. Hermes inquires the reason for their departure. Hermes explains that Gods were frustrated with the ways of Hellas. As a result they created War and left to the highest place possible unwilling to see the fights and unable to receive prayers. Gods disliked the way people opted for War even after witnessing the fruits of Peace. Trygaeus agrees that it was the exact thinking of Hellas but asks about Peace and becomes hopeful to see her.

Hermes explains that Peace is imprisoned in a deep pit beneath their feet and War plans to pound the cities of Hellas while she is in the pit. As they speak, War enters with a humongous mortar wondering about the ways he can crush the cities of Hellas. However, War seeks for a pestle and expects Riot to bring it to him. Riot reminds to War that the previous pestle is lot, one they had with Athenians is lost and the one with the Spartans is lost too. War decides to make a pestle himself and goes inside.

Aristophanes is known to criticize war leaders, politicians, men of fame, philosophers, etc. directly through his plays – the two pestle reference is a direct attack on the Athenian leader Cleon and Spartan leader Brasidas who led the war for years. Despite their death, the author does not leave them and reminds the crowd about how close they were with war and what could have happened if it continued. In contrast, Trygaeus is shown as a peaceful man without any interest towards war. It is for this reason Hermes bears his persistent attitude and explains the matters of the gods to a human being.

Trygaeus is happy to know that War does not have a pestle to use his mortar. As War goes to make another pestle, he calls upon the people of his nation in an effort to set free Peace. He recites the ode composed by Datis to call artisans, foreigners, farmers, merchants, etc. to help with his efforts. A chorus of Greek farmers and peasants respond to the call and they speak with great joy. However, Trygaeus silences them for he is fearful of revealing his endeavour to War and awakening Cerberus. But, they are highly excited as they move forward with dancing and singing.

Trygaeus tries to explain that they can be merry once they liberate the goddess. Now, Hermes threatens Trygaeus of doom and death. He does not fear death and Hermes starts to call upon Zeus to inform Him about the situation in Olympus. He along with the chorus prays Hermes not to shout. Trygaeus offers to reveal a secret and grabs the attention of Hermes. He says that Sun and Moon are plotting against Gods and are turning over the Greek nation to the Barbarians. According to Trygaeus, the Greeks provide sacrifices to Hermes and other gods whereas the Barbarians pay their tribute to the Sun and the Moon. It is for this reason the two gods have planned to perish the Greeks and make Barbarians rulers of the nation.

In addition, Trygaeus produces a golden cup as a gift to Hermes who becomes even more favorable to the humans. Now, Hermes starts to guide the humans and they all love the god for his assistance. The chorus sings about those who would not support their cause and together with Trygaeus abuse them. Now, the differences between the major cities arise as the chorus starts to abuse each other for not working hard. Finally, the farmers decide to work for themselves in order to free Peace and they pull the boulder with all their strength. They pull with all their effort and Peace is lifted out along with Mayfair and Harvesthome [her attendants].

Aristophanes uses the classic references about the nature of Hermes and letting Trygaeus use a gold goblet to turn Hermes to his side is a great strategic move. The recognition of the absence of a pestle, recognition of an opportunity to liberate Peace, the story of the Sun and Moon, offering of the cup, making the chorus work for one cause, etc. show Trygaeus not as a commoner but man with noble intentions and honour. The chorus shows that there is a difference amongst men in the cities; hence, all the farmers in the chorus start to work together leaving others aside. The moment all the farmers’ work together Peace is lifted out. This is a wonderful representation of the strength of the farmers and a message by Aristophanes that farmers are important and they could do anything when united.

The return of Trygaeus – Aristophanes Peace

Trygaeus gives the latest information of the country as she flies away in happiness. However, he gets Harvesthome and Mayfair to stay with him. He returns to his home in Hellas and plans to have Harvest as his wife. They return to Hellas and he is stormed with numerous questions by the servant about the Gods, stars, life, etc. He reveals everything he understands and decided to have a festival for Mayfair and their efforts to liberate Peace.

Trygaeus, as if addressing the entire Hellas, declares about the celebrations and gives Harvesthome to the leaders of Athens. He says to the audience that they were like rascals when viewed from above and they seem to be much worse as he sees them very close. Now, he plans to sacrifice a lamb to honour Peace and it attracts Hierocles – oracle monger. He looks for food and says to Trygaeus that it is not the time to enjoy peace as the Gods did not will it. Trygaeus recites Homer who talks about the ill-effects of war and drives Hierocles without giving any libations. After eating his share, Trygaeus goes indoors to prepare for wedding with Harvesthome. The chorus speaks to the audience in the absence of their hero and talk about wondrous nature of the country while it is free of war. 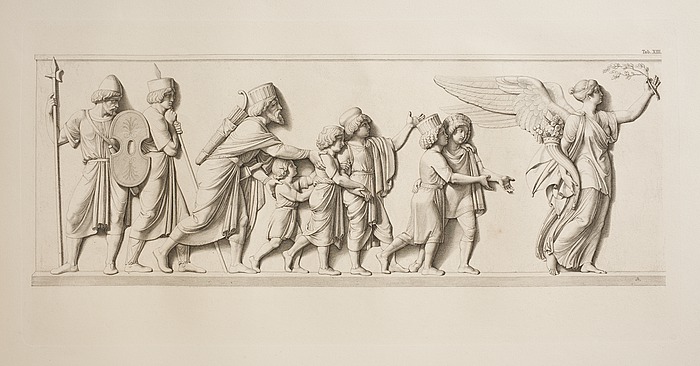 The intention of Trygaeus to take Harvesthome as his wife is a representation of the thriving of a common man to have a good life. A life where is food to eat, harmony to cherish and family to love. On the contrary, Hierocles believes that there should be war as his oracles say so – a superstition as believed by Aristophanes. The chorus of farmers and other commoners enjoy by singing of the harmony they see in the fields instead of dead soldiers and battle cries.

Trygaeus returns to the stage fully dressed and prepared for the wedding celebrations. Many tradesmen of different skills approach him. The sickle-maker praises him for obtaining peace while the crest-maker, breastplate-seller, trumpeter, helmet-seller and spear-burnisher accuse Trygaeus of robbing them from their business. As he points out different uses of these tools rather than in a battle, they feel insulted and go away. A boy starts to sing of the glorious battles of the past as written by Homer. Trygaeus feels that it is mockery and sends him. Then, he declares the commencement of the feast and calls for celebrations involving everyman.

Aristophanes does not forget about the tradesmen who would not have a future. However, he criticizes their behaviour by declining the offer presented by Trygaeus. Although, it appears funny this is placed at the end of the play meaning the author intentionally speaks of the common man than of the noble men and reputed people in the society. The play ends with joy all over and a peaceful environment.

Aristophanes Peace is a one of a kind play with so many interesting aspects to study. The comical elements and witty dialogues are a start, but there are so many references that even scholars would feel too much. The cleverness of their insertion and the simple use of words while doing so make Aristophanes Peace one of the greatest comedies of Greek literature and world literature.