Philip Larkin, the unofficial poet laureate of his age, was well-known for his descriptions of the English landscape in short sentences. His works were initially influenced by T. S. Eliot, W. H. Auden and W. B. Yeats [although he discredited them later to follow his own school of poetry known as The Movement]. He used a pseudonym for some of his works, especially prose writings and he wrote under the name Brunette Coleman. Philip Larkin became famous for his poetry from his third collection known as The Less Deceived. Coming is a poem in this collection and is regarded as one of the best poems written by Philip Larkin along with Whitsun Weddings, Church Going, Toads, etc. 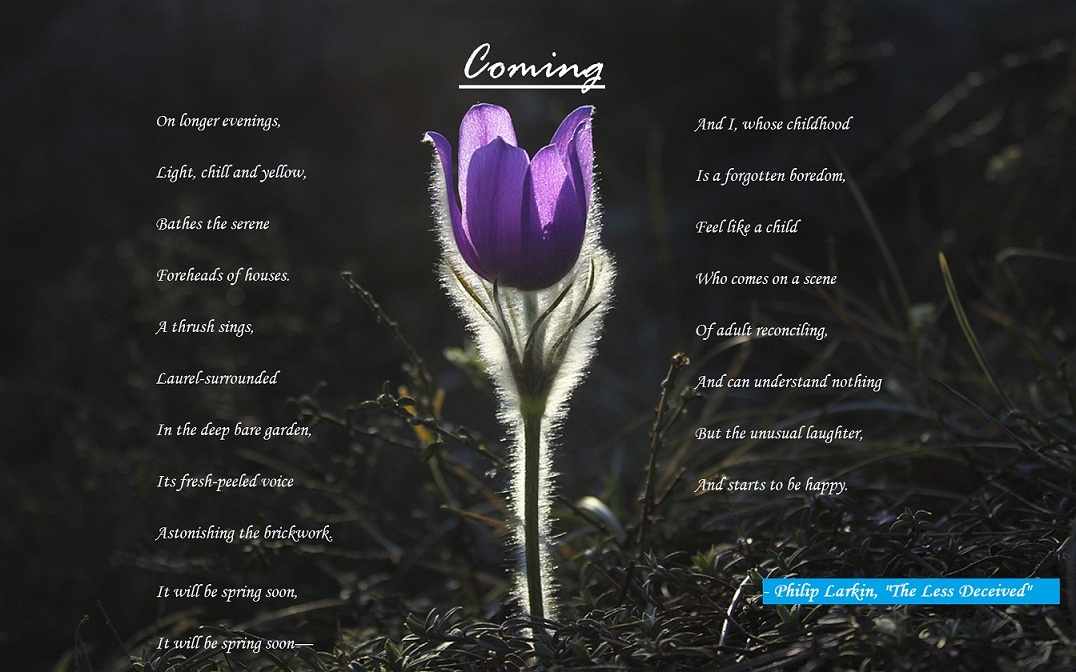 The poet speaks of the long winter with its chill and long evenings. The day seems longer for everyone in their houses. Then, a thrush sings indicating the arrival of spring. The voice of the bird astonishes those inside the houses who cheer about the coming of spring. The poet feels like a child who has forgotten his boring childhood. He tries to reconcile his past life with his adult life with the spring. But, he understands nothing about his childhood but laughs without any intention and feels happy.

The poem consists of nineteen [19] lines without metre or rhyme and is not written in the form of stanzas. In general, Larkin’s poetry contains pessimism while dealing with different subjects. However, the speaker in the poem feels happy to hear the song of the thrush and at the arrival of spring and the end of winter. The human psychology is well paralleled with the change of seasons. In winter, chill and long evenings bathe the houses the spring astonishes the “brickwork” reverberated by the voice of the thrush.

The poem shifts to the view point of the speaker who anticipates the advent of spring. The phrase – “It will be spring soon” is repeated twice to give impetus to the joy of the speaker. This kind of reiterating is done by children who feel happy or when playing with utmost joy. The poet cleverly confesses that he is trying to reconcile with the child within. As an adult, he cannot remember the days of joy and feels that his childhood is monotonous. He cannot come to a reconciling moment but feels happy for no reason. Despite the absence of understanding, which is a bit pessimistic, Philip Larkin creates an emotional mixture of hope, joy and optimism with the ending.

Overall, Philip Larkin produces a memorable poem with the song of the thrush, astonishing brickwork, unusual laughter and happy beginnings. Coming is a simple yet wonderfully meaningful poem that is Universal and can be connected with every human.