Leonardo da Vinci, the name alone suffices to draw inspiration as he is the true spirit of Renaissance – The Universal Man – whose works are familiar even in the remotest corners of the world. St. John the Baptist can be fairly called as a painting that is not amongst the famous ones of the master; nonetheless, it has gained the reputation as one of the finest works of art. This is considered as the last painting of da Vinci completed during 1513-1536.

A Note on St. John the Baptist

St. John the Baptist is described as the one, who wears camel skin, eats locusts and drinks on honey. He is mentioned in all the canonical gospels. He believed in Baptism as a way to find repentance for the sins in the life and find forgiveness. In the Gospel of Mark, it is written that St. John prophecies the coming of Jesus Christ who baptizes the faithful with Holy Spirit. Later, he becomes the one to baptize the son of God in the Jordan. It is later revealed that John was beheaded and his head was given as a present. His body was buried by his followers. John marks the first milestone in the life of Jesus i.e. baptizing. 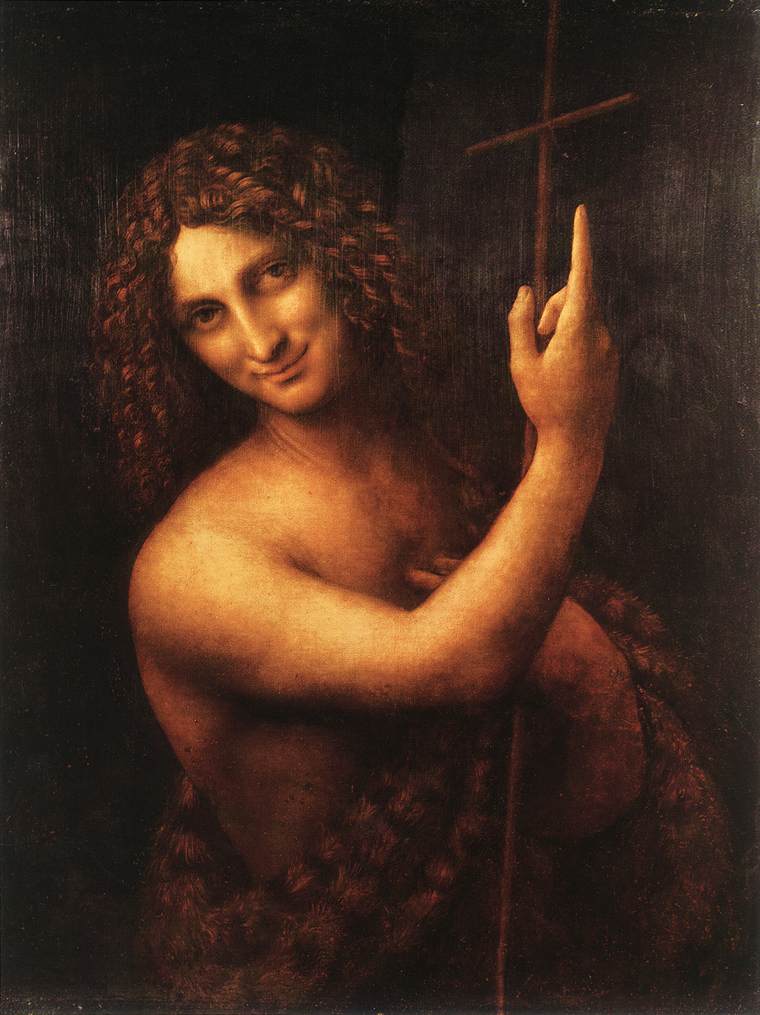 St. John was considered as a gaunt figure living in the desert with the help of natural resources. However, he is depicted by Leonardo as a strong individual with a fair complexion. The illumination of the body is the only light found in the painting indicating that those who have complete faith in God are neither faint nor dull. The enigmatic look on the face of St. John creates confusion to the viewer and makes it difficult to comprehend whether Leonardo da Vinci painted the face of St. John by taking inspiration of man’s or woman’s face. The soft left hand that is loosely tucked in resembles the mannerism of a woman. But, the firm right hand pointing towards the sky has a slight muscular tone, which makes many critics believe that the figure in da Vinci’s painting is a hermaphrodite.

Although, it is familiar to find such enigmatic figures in the paintings of da Vinci – it is highly unlikely that a man of his faith and understanding would present St. John in such a manner. Leonardo drew the painting in the last years of his life, which means that his understanding of the greatness of St. John in Christianity would be substantial. Therefore, one can rule out the implications about the “hermaphrodite” elements involved in the painting – St. John the Baptist.

The use of contrasting forces namely darkness and light, reminds the constant battle between the righteous and the sinners. St. John answers to this eternal battle through a hand sign. In the background, one can observe a Reed Cross held in the left hand of St. John. These two elements represent the only salvation one can find is through the knowing of God.

The painting along with many from Leonardo has led to lot of speculations like esoteric groups, alchemy, hidden messages, etc. Once, an individual can clear the fog created by these conjectures it will be clearly visible that St. John the Baptist is a painting that shows complete faith in God.

Get the best canvas print of Da Vinci’s great work