Growing up is a hard, sometimes confusing journey that is inevitable despite our own wishes. Authors often explore the idea of children growing older and the changes that adulthood brings to their lives because it is something every person can relate to.

Elizabeth Bishop explores that idea of a sudden, almost jarring, realization of growing up and the confusion brought along with it in her poem In The Waiting Room, which follows a six year old girl in a dentist’s waiting room. The coming of age poem by Bishop explores the emotions of a young girl who, after suddenly realizing she is growing older, wishes to fight her own aging and struggles with her emotions which is casted by a fear of becoming like the adults around her in the dentist office, and eventually an acceptance of growing up.

Setting of the poem:

The poem – In The Waiting Room, opens with setting the scene in Worcester, Massachusetts which serves as a function to establish a mundane, unimportant trip to a dentist office.

In Worcester, Massachusetts,
I went with Aunt Consuelo
to keep her dentist’s appointment and sat and waited for her.

Immediately, the reader is transported to the mind of the young girl, who we find out later in the story is just six years old and named Elizabeth nearing her seventh birthday. Bishop uses the setting of Worcester to convey the almost mundane aspect to the opening of the story. There is nothing particularly special about the time and place in which the poem opens and this allows the reader to focus on the narrator’s personal emotions rather than the setting of the story being told. The story could be taking place anywhere in any place and time, and Bishop captures the idea of a monotonous visit to the dentist by using a relatively unknown town to allow the reader to begin to consume the raw emotions of an average, six year old girl in a dentist office waiting room.

As Elizabeth waits for her Aunt, who receives no particular introduction from Elizabeth which serves further as a function to focus the reader’s attention solely on Elizabeth, we are introduced to the adult patients surrounding her as she says, “The waiting room was full of grown-up people.”

This becomes the first implication of a new surrounding used by Bishop and later leads to a realization of Elizabeth’s fading youth. After picking up a National Geographic magazine and being exposed to graphic, adult images, Elizabeth struggles with the concept that she is like the adults around her.

I scarcely dared to look to see what it was I was. I gave a sidelong glance
–I couldn’t look any higher– at shadowy gray knees, trousers and skirts and boots
and different pairs of hands lying under the lamps.

The National Geographic magazine and the adults around her has begun to confuse Elizabeth as a young girl, and it becomes clear she has never thought about her own mortality until this point.

When Elizabeth opens the magazine and views the images, she is exposed to an adult world she never knew existed prior to her visit to the dentist office, such as “a dead man slung on a pole”, imagery that is obviously shocking to a six year old. Sitting with the adults around her, Elizabeth begins to have an existential crisis, wondering what makes her “her”, saying: “Why should I be my aunt, or me, or anyone?”, and begins to question the reality that she’s known up to this point in her young life. Elizabeth struggles with coming to terms with the sudden realization that she is not different from any of the adults in the waiting room, and eventually she will be like her aunt and the adults surrounding her in the waiting room.

The fear of Aging:

As the poem – In The Waiting Room unfolds, we see Elizabeth begin to question her own age for the first time in the story, saying:

I said to myself: three days
and you’ll be seven years old.
I was saying it to stop
the sensation of falling off the round, turning world. into cold, blue-black space 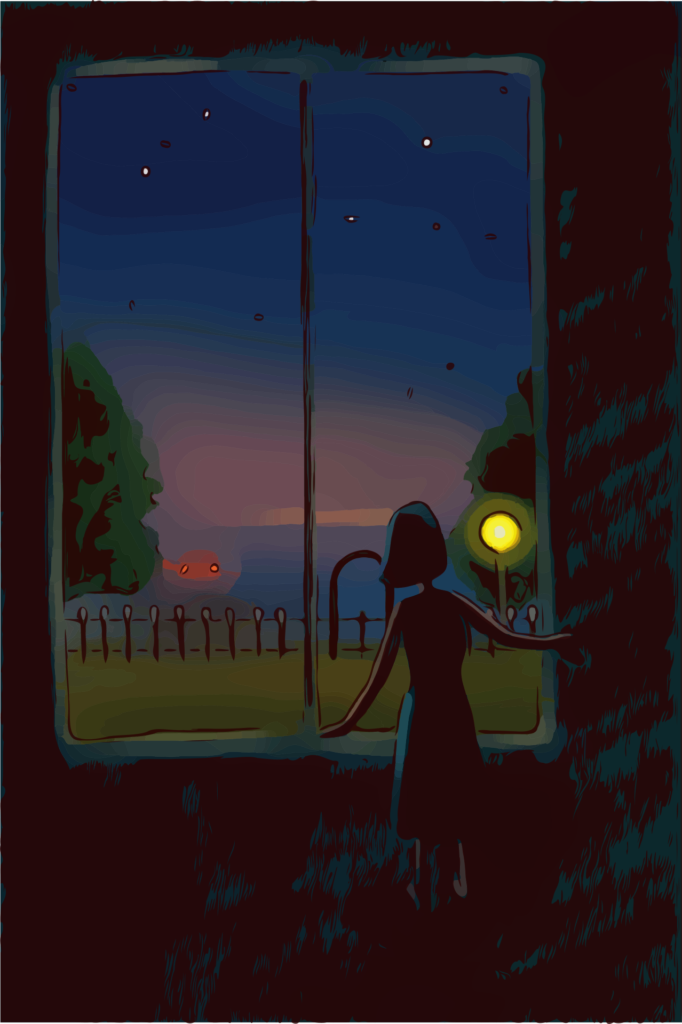 The girl’s self-awareness is an important landmark early on in the story because it establishes her rather crude outlook on aging by describing the world as “turning into cold, blue-back space”. By displaying her vulnerable emotions, Bishop conveys the raw fearfulness a young girl may feel in this situation. It is important to understand that the narrator may be undergoing her first ever “existential crisis”, and the concept that she is uncovering for the first time in her young life is jarring and radical enough to shatter her world. Elizabeth begins to feel powerless as she realizes there’s nothing she can do to stop time from carrying on.

Her own aging is unstoppable and that realization panics her into a state of mania of pondering space and time. Bishop ties the concept of fear and not wanting to grow older with the acceptance that aging and Elizabeth’s mortality is inevitable by bringing the character back down to earth, or in this case the dentist office:

The waiting room was bright and too hot. It was sliding beneath a big black wave,
another, and another.

The story comes down from the rollercoaster ride of panic and anxiety of the young girl, the reader is transported back to the mundane, “hot” waiting room alongside six year old Elizabeth. Then, Bishop creatively uses the same concept of time the young Elizabeth was panicking amount earlier to establish a sort of calmness to end the poem, which serves as an acceptance of her own mortality from the young girl:

Then I was back in it. The War was on. Outside,
in Worcester, Massachusetts, were night and slush and cold, and it was still the fifth
of February, 1918.

Despite her fear, which led to a panic and sort of mania, Elizabeth snaps out of it at the end and finds that nothing has changed despite her worrying. The date is still the fifth of February and the slush and cold is still present outside. Nothing has actually changed despite taking the reader on an anxiety-fueled roller coaster along with the young girl moments prior. In the end, the reader is left with a sense of acceptance which can be transposed on the young narrator and her own acceptance of aging and her own mortality.

At first, the concept of growing older scared Elizabeth to her core, but snapping out of her fear and panic she comes to realize the weather is the same, the day is the same, and it always will be. No matter her age, Elizabeth will still be herself, just like the day will always be today, and the weather outside will be the weather. It is a rather simple approach to a scary problem she faces, but in this case the simplicity of the answer ends the poem on a calming note that shows acceptance of growing up. In The Waiting Room portrays life in a realistic manner from the mind of a young girl thinking about aging. Elizabeth Bishop indulges us into the poem and we can understand that these fears and thoughts are nearly identical to every girl growing up.

Michael McNanie is a Literature student at University of California, Merced. His research interests revolve around 19th century literature, as well as research towards mental and psychological effects of literature, language, and art. Michael is also the Vice President of the Young Artist Movement, which promotes artistic expression and creativity on campus, as well as the founder of Literature in Review which psychoanalyses various forms of literature and artistic movements of history. Michael is particularly interested in the cultural affects literature and art has on both modern and classical history.