Skip to content
Home » Composers » Ludwig van Beethoven – Fur Elise or Bagatelle No. 25 in A minor

Beethoven was magical when it came to composing musical pieces that were grand on the outside and harmonious on the inside. Fur Elise by Beethoven is a piece which is subtle, gentle, calm, serene and peaceful without any robust movements that ramifies the soul into another emotion. Of all the great (or perhaps greatest) pieces done by Beethoven the Fur Elise or the Bagatelle No. 25 in A minor is the most elegant one. 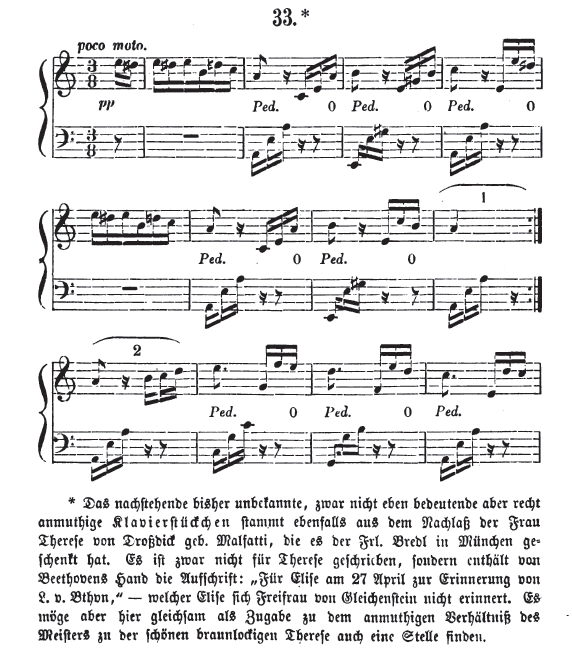 Keeping aside the popular belief, it is also believed that that the Bagatelle No. 25 is name after Fur Therese. Beethoven loved Therese for many years during the prime of his career and scholars believe that Ludwig Nohl might have misinterpreted the not-so-beautiful hand writing of Beethoven and declared the piece as “Fur Elise” instead of “Fur Therese”. As the score was published four decades after the death of Beethoven there isn’t much precision about the details of this work.

However, there is evidence that Beethoven made modifications to Fur Elise in the year 1822, but it was never released as one of his works whilst he was alive. He added a lot of material to the original version and made some significant changes. The piece is categorized into the three sections and section-A is most famous amongst pianists who use this as a fundamental for the students. It is a very intricate piece difficult to master, but provides great pleasure to anyone who listens to it.

{Note: You will be redirected to another page}