Rembrandt Harmenszoon was a masterful painter of the Baroque period and an enthusiastic art collector. He is known to have touched every aspect of artwork from religion to historical events to depicting animal life through his paintings. His ability to draw contrasting images and imaginary details on a subject matter made him one of the greatest Dutch painters. During his lifetime he completed over thousand drawing, three hundred engraving and four hundred paintings. As his subject matters were completely devoid of a barrier, he was able to achieve such diversity and number in his work. The Anatomy lesson of Dr. Nicolaes Tulp does not fit into any subject or topic and is a representation of a medical procedure in the style and manner of Rembrandt. 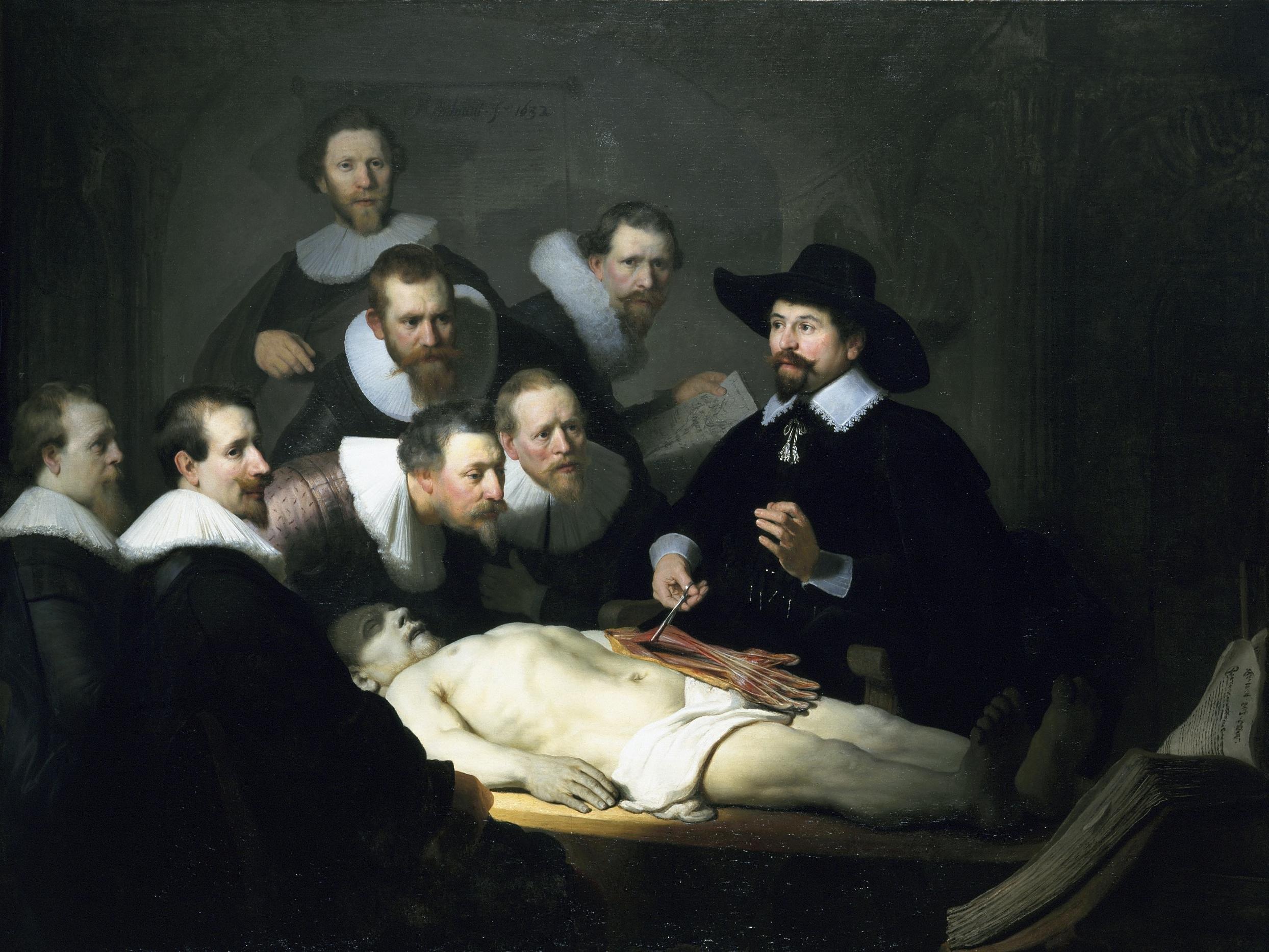 History related to the painting

In the 16th century there was a tradition started by Andreas Vesalius that every year the surgeon guild must hold an anatomy lecture for a large attendance. The corpse was decided to be a criminal who got executed the very same day. It was customary to have a painting done while the Praelector commences the anatomy session. The painting should consist of the Praelector, some of the members who have attended and the corpse.

Rembrandt Harmenszoon moved to Amsterdam in the year 1631 in hope to excel his career as an artist. During this time Dr. Nicolaes Tulip was the Praelector the Surgeon’s Guild of Amsterdam. Fortunately, Rembrandt was commissioned to depict the anatomy scene a year after his arrival. This is considered as a great achievement because there were many proficient painters in Amsterdam. The Anatomy lesson of Dr. Nicolaes Tulp done by Rembrandt consisted of eight people including Dr. Tulip and a corpse who was Adriaen Adriaenszoon. Adriaen was an armed robber, who was hanged to death on 31st of January, 1632. So, one can pinpoint that The Anatomy lesson of Dr. Nicolaes Tulp was drawn on the same day. Another interesting fact is that the people present in the painting need to pay money to the painter so that they can be present in the artwork. It is said by some scholars that two of the members are later added by Rembrandt because of this fact.

Rembrandt clearly wants to highlight Dr. Nicolaes Tulp through the painting. It is for this reason he uses a hat to separate him from the others. Further, the way he holds his left shows that Tulp takes medicine and anatomy as preaching rather than just a career option. In addition, there is no presence of an assistant who would help Tulp in the process letting the anatomist explain about the anatomy of the corpse to the gathering.

There are no anatomy tools, typical to the anatomy paintings of the age. In most cases, the artist preferred to not show those tools either thinking them as a distraction or unnecessary. However, this has led to the speculation that the painting was not done in the gathering hall where the actual anatomy took place. Instead, some critics believe that it was done by Rembrandt using his imagination after observing the anatomy up close. Either this or it was done at the hall, one thing is certain that Rembrandt was commissioned to depict The Anatomy lesson of Dr. Nicolaes Tulp.

The corpse of Adriaen Adriaenszoon is highlighted at the centre and his left arm is dissected. This is not tradition to the anatomy procedures of that time. As there were limited options, the body is dissected near the chest for examination of vital organs that would decompose first. This is typical representation of Rembrandt who takes artistic liberty while creating his artworks. The seven members excluding Dr. Tulp are eager in their own occupation. Two of them are looking at the gathering [or the viewer of the painting]. Among them one is holding a piece of paper containing details about anatomy and the names of the members in the painting – The Anatomy lesson of Dr. Nicolaes Tulp. The five others are immersed in the lessons of Dr. Tulp observing the corpse and hearing his lecture.

A book is present at the feet of Adriaen Adriaenszoon, which would be a book on anatomy to show the members about different parts of the body. Although a speculation, most critics believe that the book could be De humani corporis fabrica written by Andreas Vesalius. The prediction is due to the wide use of the book for studying anatomy and consideration of it as a standard book of anatomy for students and doctors alike. Another aspect of the painting one could observe is the presence of Rembrandt’s signature behind a member. It is present on a memo or paper hanged to the wall and says “Rembrandt made it” and is dated.

Overall, The Anatomy lesson of Dr. Nicolaes Tulp by Rembrandt is a complete painting covering every aspect as expected by the Surgeon’s guild. Dr. Tulp is highlighted, the members are listed in a paper, Vesalius is remembered in the form of his book and Rembrandt owns the painting through the signature in the back. The Anatomy lesson of Dr. Nicolaes Tulp and many other such wonderful paintings by Rembrandt Harmenszoon make him one of the best artists in the world next only to the triumvirate.