The poet laureate of Vermont, Robert Lee Frost, is a Universal figure known for his sense of rural setting and using them to touch the social side of mankind. The Road Not Taken published in the year 1916 is one of his finest accomplishments as a poet. It is no embellishment if anyone claims that this particular poem is amongst the world’s most read and taught one. The four stanza poem has inspired and stirred many minds in the world. The young minds immediately connect to The Road Not Taken as it represents them while taking unknown decisions. The poem is narrated by a speaker who is thinking of the past and the decision he has to take while travelling through woods one day. 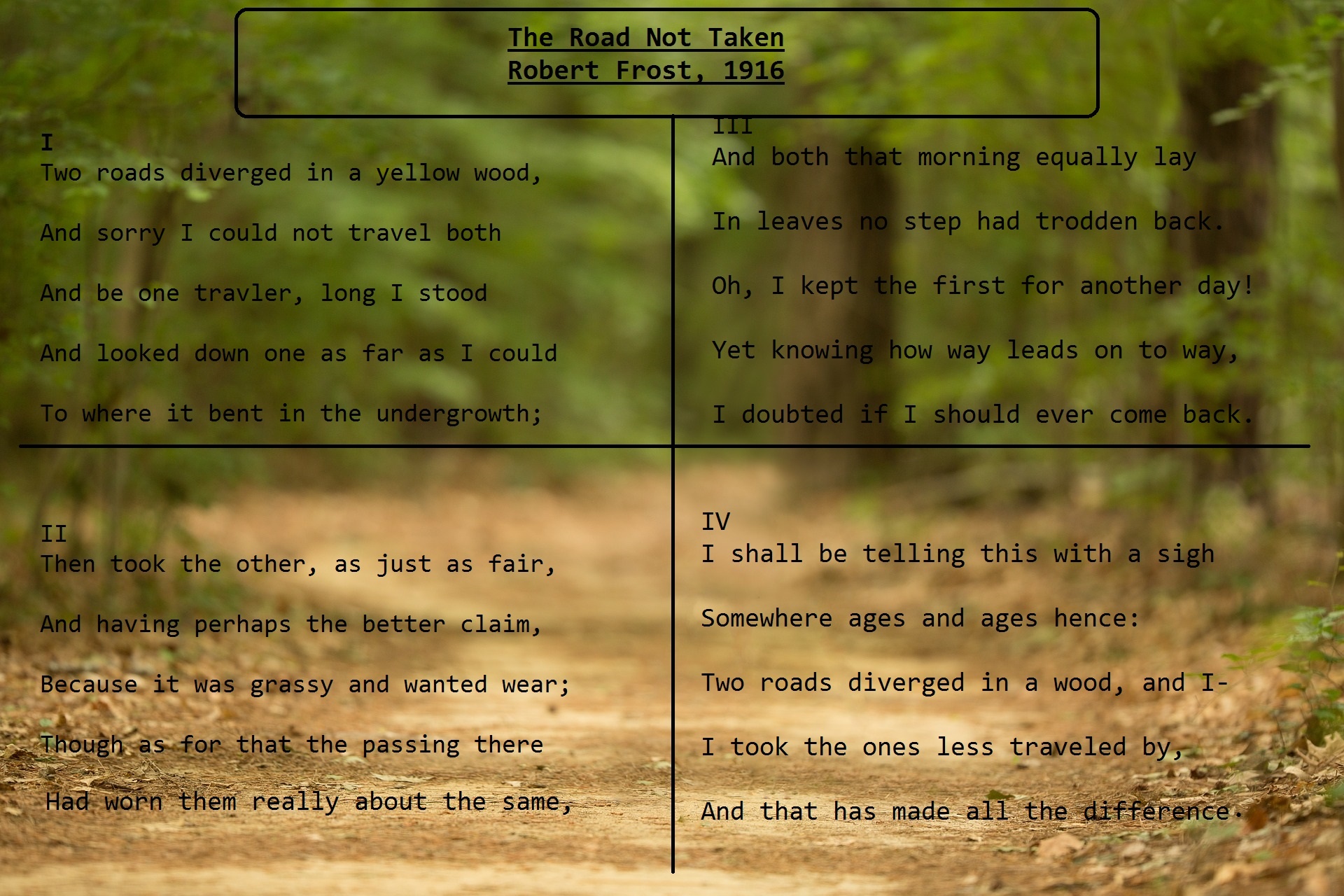 Stanza I – The Road Not Taken – Summary & Analysis

The poet travelling in the forest during an autumn comes to a point where there is a fork, leading to two different paths. He knows that it is impossible to travel both being one individual and stands in the middle analyzing the condition. He looks down one road till the eye permits and witnesses a bend that dissolves with the undergrowth.

Robert Frost uses the term “yellow wood” to describe the American setting he uses so often in his poems. The reader gets to know from the following stanzas that the season is autumn as there are leaves all over the road. The dilemma of the speaker in the poem is simple and is revealed early. The deep insight into the understanding of the road resembles the quandary of people in situations where they cannot “travel both” and stick to one path. This results in trying to judge the situation as far as possible similar to the speaker who looks at one road as far as the eye permits. The word “undergrowth” is a representation of the unknown meaning that what lies beyond the known knowledge is uncertain.

Second stanza can confuse the reader as it did for decades. Many wrong interpretations show that the speaker has taken the road that is not taken by many. However, it is clearly stated by Robert Frost that both the roads are “about the same”. Although, the misinterpretations have only lead to good, where the readers are encouraged to choose a path that is unique.  But, a misinterpretation is a misinterpretation and institutes who teach thus should realize the importance of deviating from the lines in the poem.

The leaves on the ground indicate that the season is autumn, which is a symbol of mystery, change and balance. The choice can be equalled to the season as a balanced mind would not leave anything to fate, an adventurous mind would like to seek newer roads unconcerned about the condition of the two paths and a regular mind would seek for clues that could help them take the right decision. Unfortunately, the roads show no such difference leaving the speaker to take one which made “all the difference” [stanza IV].

The speaker goes on with his observations about the two roads. He judges that in that morning the leaves are not stepped on continuously; hence are not turned to black. He ruminates about the decision taken and says that he took the second road leaving the first one to another time of journey. But, the speaker knows that it is highly impossible as once the decision is taken – one path would lead to many. During the journey, the speaker expresses doubt if he can ever return to the first road.

Once again, there is clear indication that the two roads are similar with leaves that are not stepped on by travellers. Robert Frost depicts the choice one makes with the help of the roads. There is no coming back from making a decision as one decision would open up a labyrinth of choices that an individual has to cope with. The realization sets in after experiences all the choices and the individual would realize that coming back is not something possible. The underlining intention of the stanza is keeping faith in one’s decisions. If a decision is taken with clarity, then there is nothing to worry about. If a decision is taken without proper understanding or in the heat of things, it could lead to worrying and the individual might express doubts about that choice.

The speaker believes that he will speak of his decision for many years. He has come up with a statement to speak about the choice he has to make. He says that he took the road “less travelled by” during the encounter and it made quite a difference in the journey.

The words “less travelled by” once again confuse the readers leading to support of the misinterpreted theories. However, the words have to be taken as clear sense of justification used by the poet to support the decision taken. The word “sigh” takes great importance in the stanza as it can represent both happiness and sadness. Robert Frost leaves the reader to comprehend the nature of the decision whether it is right or wrong. The last line of the poem is like a stereotype of the thinking mind. Every individual tries to support the decision taken though inherently knowing that they wonder about other options.

The Road Not Taken though might appear simple has stirred the ideologies of many intellectuals and common folk. The point of view changes from person to person when they start to analyze this poem and the majestic words have stayed a mystery. However, this poem by Robert Frost is ingenious for the message it contains and the lives it has inspired over the decades.