Rembrandt Harmenszoon van Rijn, the Dutch painting marvel, always took interest in portraying landscapes, self-portraits and portraits of other artists. His landscape depictions have been never purely about the aesthetics of Nature, but predicted many things about human life like strife, anger, hope, desire, etc. The Storm on the Sea of Galilee or “Christ in the Storm on the Sea of Galilee” is such a masterpiece depicting the Biblical scene of Jesus and the disciples crossing the sea when there is a raging storm.

The painting was completed in the year 1633 and Rembrandt took the maritime theme of the painting to ensure that the theme will be familiar to the people of the age and time. As an effort to establish himself as an artist, he took this subject and it is his only seascape painting.

The Storm on the Sea of Galilee analysis

The Storm on the Sea of Galilee depicts the time when the disciples were terrified of the violent storm and are perplexed about their actions. A fierce wave is shown lifting the boat and it is about to engulf the boat into the sea. Christ looks at his disciples and their state of mind from the stern and is about to command the storm to halt. All the distressful renderings in the painting are consoled by a yellow light that is shown to set apart the clouds and create a hope to the members on the boat. 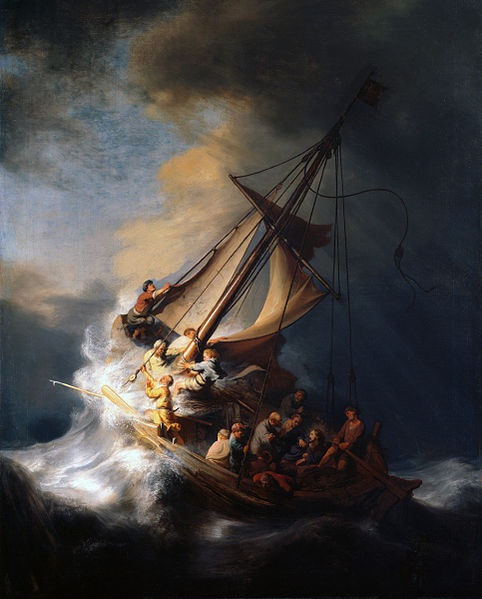 The mast shown in the Storm on the Sea of Galilee appears in the form of a Cross, indicating that faith is still there for those who pray the God in times of storming human frailties – be it spiritual or physical. Each disciple is found with different emotions and one can find empathy, hopelessness, desperation, fear, anxiety, loss, agony, doubt, etc. Amidst such weakening emotions Christ appears serene and aware of the things to do so that he could save his disciples out of such anguishing times.

The painting could be related immediately by those who experienced the horrific treatment of the sea. This made the Storm on the Sea of Galilee a drama identical to everyone who were sailing the seas out of many reasons. Through the painting Rembrandt could present the sacred Biblical story of the Christ and his disciples, and was able to relate to people who are aware of the nature of the sea.

Unfortunately, the Storm on the Sea of Galilee was stolen in the year 1990 along with 12 other artworks. The painting was on display at the Isabella Stewart Gardner Museum [Boston] during the theft and to honour the work of Rembrandt, the museum still displays an empty frame which carried the hallmark painting. The search is still going to find the piece and hopefully the biggest & costliest art theft in the US will be cracked down by the Federal Bureau of Investigation and the artworks are restored to their original places.

Get the best canvas print