Pablo Picasso laid great foundations to visual arts and developed the movement known as Cubism in painting. His works such as Guernica, Girl before a mirror and The Old Guitarist reflect express different styles and moods of the man (Picasso). The painting was done during the “Blue Period”, which was a painful reaction to the death of his friend – Casagemas.

The Blue Period lasted from 1901 to 1904 and The Old Guitarist was produced in the year 1903. The use of the shade blue is evident in the painting and the monochromatic palette produces a state of pain and hopelessness. The melancholic expressions were mainly because of the demise of Casagemas, as confessed by Picasso and the painting reflects the predicament of people who seek alms to survive. 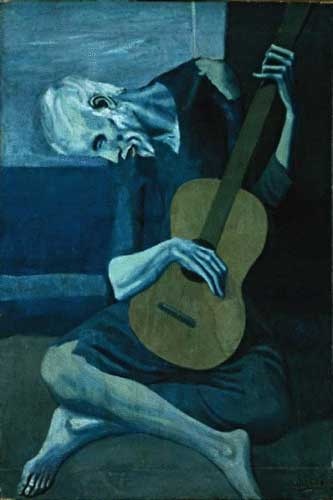 The old man is skin with bones visible, but he still latches on to the guitar to seek some redemption for his dire situation. The scene immediately becomes an archetype for those who beg on the streets to make a living. The piteous condition of the old guitarist is depicted through the torn clothes, pale blue skin, weak body, etc. whereas the effect is further illuminated by the blindness of the old man (hence the painting got reputed as The Blind Guitarist). The walls and the atmosphere also reflect the sadness of the man and create a horrific display of the life of lower class individuals.

The guitar of the blind man is the only thing that has a colour variation (brown) and it symbolically represents the only redeeming tool for the man. So, he leans on to the guitar with desperation to survive and hope that his music can bring him a penny. The Old Guitarist created by Pablo Picasso has a Universal appeal as there is not much that has changed over the years, when it comes to the predicament of the lower class and suffering seems to increase. The painting would haunt the onlookers for days, if not months, and has a great influence on the thinking of the working class and the high class individuals.

There are some amazing discoveries made after examining the panel in which The Old Guitarist is produced. After using X-rays, infrared and other examinations three figures were found beneath the layers of the painting hidden from the naked eye. The three figures are mother with child, an animal and an old woman with bent head. The reason behind the use of the same panel for different artworks is unclear and remains an enigma.