The painting – Girl Before a Mirror by Pablo Picasso is one of the masterpieces of Cubism movement. It was completed in the year 1932 and has been interpreted in many ways by the critics as well as art fanatics. The woman in the painting was Marie-Therese Walter – the mistress of Pablo, who inspired him and his works during the 1930s.

This painting is more personal to Picasso when one compares them to Guernica or The Old Guitarist because of the presentation of Therese through the canvas. Let’s understand the painting in various lights, which are appropriate to the work. 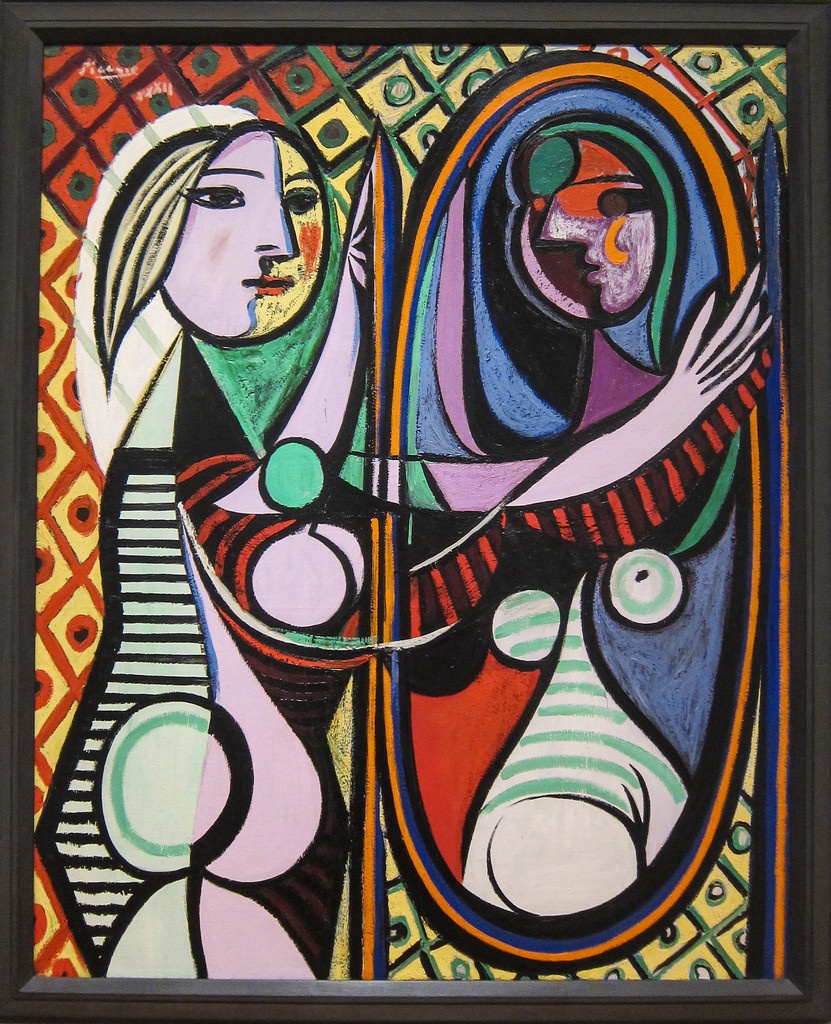 Picasso was very much fond of Therese and she was the prime motivator to the artist for many years. This might have given Picasso an opportunity to observe her nature in complete. It can be observed that the woman before the mirror is fair with a pink complexion of the skin. This pink colour is observed from the viewer’s vantage point, where as the other side is the one the woman thinks that her real self is. The mirror shows a different woman than the actual appearance, who is dark and morbid. There are tears, sagginess, hopelessness, vanity, despair, etc. shown through the reflection; whereas the woman is shown with brightness, physical strength and her face is full of knowledge and understanding. Therese Walter was a bright woman with all the qualities one could expect from a wise individual. Picasso through his painting justifies her nature by interpreting all the possible emotions and feelings of the young woman.

Girl Before a Mirror Analysis: Extremities

The painting – Girl Before a Mirror – shows the dual nature of life through a number of representations through the use of colour, human form, objects, wall, etc. The woman is shown to have a dual mind with serenity and rage. It is shown by dividing the face of the woman into moon and sun, which can be noticed with the help of colours used by Picasso. Meanwhile, the reflection shows the mixture of darkness and light, day and night, barrenness and fertility. One side of the face is filled with darkness, while the other is crying for hope – a light that can bring the woman out of all her miseries. The woman has firm breasts; whereas the reflection shows that her physical strength has left her. However, the barrenness of the breasts is subdued by the pregnant stomach. It can be observed that there are stripes of green on the stomach, indicating fertility. Further, Picasso always used green striped clothing when he was at work. This shows that there is a definite presence of Picasso, which is affecting the condition of the woman.

Girl Before a Mirror Analysis: Vanity

Is it not true that many people judge their selves by the way others think of them or the way they see themselves in front of a mirror? Some people realize that the true nature of an individual is mirrored from the heart while others fall into this false admiration and thrive to become more attractive or appeasing. The woman who has all the brightness in the world and is shown as angelic; with a light surrounding her head, looks at herself and feels that there is still an insufficiency. A lacking essence that makes her look depressed is filled in her senses and is hovering as a dark spirit within the body. Further, the fact that she has to move into the next step of life where she loses her vital strength, beauty and physical shine to become a responsible mother is shown through the reflection. It is this idea that has crept over her mind and making her feel vain. The design of the wallpaper is in such a way that every block appears as an eye watching the woman. This clearly reflects on the woman who begins to notice faults in her body and beauty. Picasso presents a clear message that self-admiration or Narcissism or heeding the opinions of others can lead to devastating consequences as seen in the case of the woman.

There are numerous other interpretations of the painting and the direct meaning of the painting has remained an enigma for art critics for many years. Each interpretation varies and that quality makes the painting a Universal one. The powerful imagination of Pablo Picasso along with his abilities to picture so many emotions through few objects and a ‘single’ individual makes the Girl Before a Mirror a masterpiece – not only for Cubism, but for the entire painting Universe.

Location: Girl Before a Mirror by Pablo Picasso is currently at The Museum of Modern Art, New York.

Get a canvas print of Picasso’s masterpiece