The Old English period or Anglo-Saxon period in literature spans over six hundred years from 450 A.D to 1066 A.D. During the middle years of 5th century the Roman armies withdrew from Britain and the Germanic tribes flourished expanding rapidly. The Anglo-Saxons who were hired to take care of the Picts attacking several parts of Britain revolted against their hirers for non-payment of promised riches. The Anglo-Saxons were defeated for their mutiny by the Britain armies but this did not change their migration plans. Before and after the war, considerable numbers of Anglo-Saxon tribes came to the shores of Britain and started to occupy the land. Gradually, Anglo-Saxons grew in number and merged with the Britain people with their own identity.

In the book Germania, Roman historian Tacitus wrote in detail about the Germanic tribes and their settlement in Britain. The name “Englaland” meaning land of the Angles was mentioned in this work and the name has become or modified into the modern usage – England. During the six centuries of tumultuous conditions, literature gradually grew in prominence and hundreds of literary pieces were written during this time. Despite Latin being the official language used to produce literature, Old English became popular due to its use by Anglo-Saxons and other tribes. Hence, there were many works that were produced in Old English as well during the Anglo-Saxon period in literature. The following are the major works during the period, which gave a lot of information about the history of Britain during this vast period.

Beowulf – An epic poem that has survived for more than a thousand years is considered to be one of the finest pieces of literature. The epic poem is divided into two parts, where the first part deals with the triumph of Beowulf and the second deals with the death of Beowulf. Beowulf is a renowned warrior who is summoned by Hrogthar – King of Denmark. He asks Beowulf to fight a monster named Grendel. Beowulf slays Grendel and he also kills its mother. The second part is described when Beowulf is old and has become the King of Gates. He becomes mortally wounded while killing a dragon and the poem ends with the mention of details regarding his funeral. The Anglo-Saxon period in literature got curious interest among contemporary historians and researchers mainly due to this epic poem. 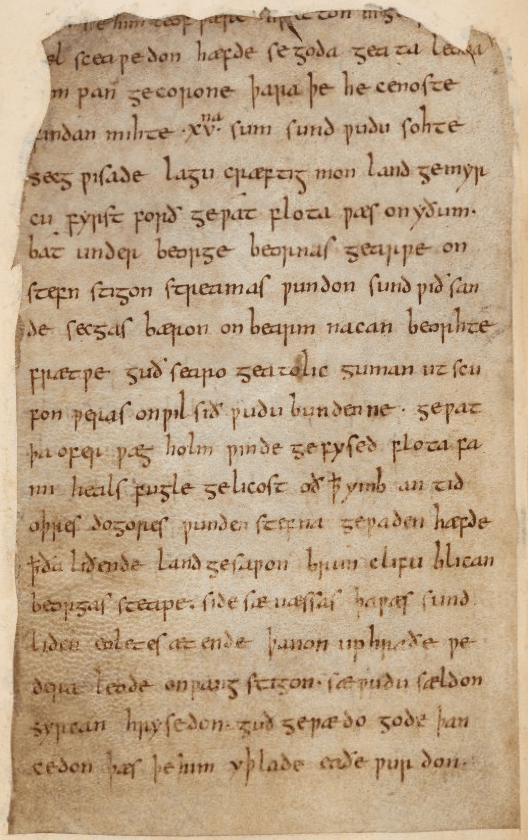 The Fight at Finnsburgh – A fragmented poem that deals with similar battles that are mentioned in Beowulf; but is written with a different point of view.

Widsith – The poem appears like a survey and is autobiographical presentation of a scop about the people of England, heroes of the age and kings of the age. Widsith follows the form of “thulas”, which is an ancient poetic form of Germanic literature.

Deor – The poem comprises of forty-two lines dealing with a minstrel’s complaint who was a faithful servant to his lord. Eventually, he is supplanted by Heorrenda a rival despite his sincere service over the years. The minstrel consoles himself by relating the adventure of heroes of Germanic origin. There is a subtle comparative note and elegiac note that one could observe from the poem.

Waldhere – The two part poem was discovered in the year 1860 and speaks about the Germanic heroes who were popular amongst the Anglo-Saxons.

Ecclesiastical History of the English People – Saint Bede distinctly speaks about the nature of Churches during the age and of the English people. The work alone got him the title – “The Father of English History” because of the extensive explanation of religious and regular life during Anglo-Saxon period.

Hymn – Caedmon’s Hymn is a very short alliterative poem consisting of nine lines. The poem deals with honouring God in the form of a song which the poet learnt from his dream.

The Exeter Book – Perhaps the most important collection after Beowulf that contains a lot of poems and riddles is The Exeter Book. It contains poems like Widsith, The Wife’s Lament, The Seafarer, The Wanderer, The Husband’s Message, Wulf and Eadwacer, and many other works that are popular during the Anglo-Saxon period in literature. As many as hundred riddles are found in the book and most of them have either Latin origins or taken from the works of Symphosius.

The Anglo-Saxon period in literature helped to spread Old English as a literary base and helped to expand the literary richness of the age. Many heroic stories, poetical implementations and other forms became standards for the poets and writers to follow in middle English period as well as the modern English period.