The myth of Sisyphus is considered as one of the most popular and interesting Greek myths. The name Sisyphus is resounded in many of the epics such as Homer’s Iliad, Odyssey and Ovid’s Metamorphoses. Sophocles, Horace, Apollodorus, Aristophanes, etc. mentioned Sisyphus in one or other way in their works. However, there are no complete mentions of the life of Sisyphus in these epics; but one could clearly understand everything about him. It was Hyginus the Latin writer of the 1st century AD, who gave a considerable amount of information based on research about Sisyphus in his book – Fabulae.

Sisyphus was one of the sons of Aeolus [who is the son of Hellen]. His brothers are Athamas, Cretheus and Salmoneus. Sisyphus was married to Merope, the daughter of Atlas and had three children namely Sinon, Ornytion and Glaucus. He lived in the Isthmus of Corinth and had great herds of cattle. Sisyphus is considered as a man with cunningness and knowledge, the combination of which he used to deceive his enemies and those he disliked. He became a well-known figure in Greek history because of six incidents, which are discussed below.

I – Myth of Sisyphus – Autolycus, the thief

In the land of Isthmus, there lived a man named Autolycus who happens to be living near Sisyphus. Autolycus is renowned for his capabilities as a thief and he had abilities to transform or metamorphose anything he stole into another thing. For example, he could transform a horned beast into a one without horns or a black beast into a white one. This power was bestowed to him by Hermes; therefore, it was impossible to account Autolycus for any theft. Autolycus stole the cattle of Sisyphus and son of Aeolus observed that the numbers of cattle in his herds are decreasing steadily, while those of Autolycus are increasing.

After realizing this, Sisyphus brands the hooves of his cattle. There are two alternative versions regarding the brand used by Sisyphus. Some writers believe that he used the monogram “SS”, while others mention that he used the words “stolen by Autolycus”. As Autolycus was unaware of this, he went with his errand as usual. In the morning, Sisyphus was able to find his branding on the road as he marked his cattle. They led straight to Autolycus and there was a huge argument amongst the two witnessed by the crowd gathering. As the witnesses were giving their testimonials, Sisyphus roams around the house of Autolycus and seduces his daughter Anticleia.

Anticleia later becomes the wife of Laertes and bores Odysseus. Although, Laertes is the father of Odysseus it is believed that the cunning nature of Odysseus was bequeathed to him because of the seduction of Anticleia by Sisyphus. Hence Odysseus is also called “Hypsipylon” after his cunning nature resembling Sisyphus.

Sisyphus is known to be the founder of Corinth, which was called Ephyra during his reign. Some people believe that the city was given as a gift to him by Medea [wife of Jason]. However, the popular belief is that Sisyphus grew his city and its population with the help of mushrooms. Wherever, Sisyphus planted mushrooms there sprung human beings out of them. As a result, he was able to increase the population of the city and excel in trade. He was known as ruthless when it comes to trade and commerce, disallowing anyone outside Corinth to perform navigation through his lands.

After the death of the Aeolus, father of Sisyphus, he expected the rule of the land be granted to him. On the contrary, it was given to Salmoneus – one of the brothers. As Sisyphus was the heir to the throne, he goes to the Oracle of Delphi to determine his actions. The Oracle prophesizes that the sons of the niece of Salmoneus [Tyro] will kill him in the future; therefore, he tries to pacify this prophecy by seducing Tyro.

He accomplishes his errand of seducing Tyro and she gets to know the intentions of Sisyphus. She realizes that it was not out of love that he came to her; therefore, she kills the two children she bores because of him. As a result, he succeeds in preventing his death in the hands of Tyro’s children. He further uses it as a chance to denigrate Salmoneus; as a result Salmoneus gets expelled from Thessaly.

Aegina was the daughter of river god Asopus, whose daughters were all seduced by the gods. It was known that Zeus in order to seduce Aegina came in the form of an Eagle and took her away to an island. This was witnessed by Sisyphus, although, he couldn’t tell who the maiden was and why she is taken away by an Eagle. When Asopus comes in search of his daughter to Corinth, Sisyphus realizes what he had seen and tries to get benefited from the opportunity. He asks Asopus to create a perennial spring within the citadel of Corinth in exchange to the information about Aegina. After fulfilling his wishes, he reveals what he saw and Asopus goes to the rescue of his daughter. Zeus escapes the fury of Asopus by throwing thunderbolts and Asopus returns defeated to his place. 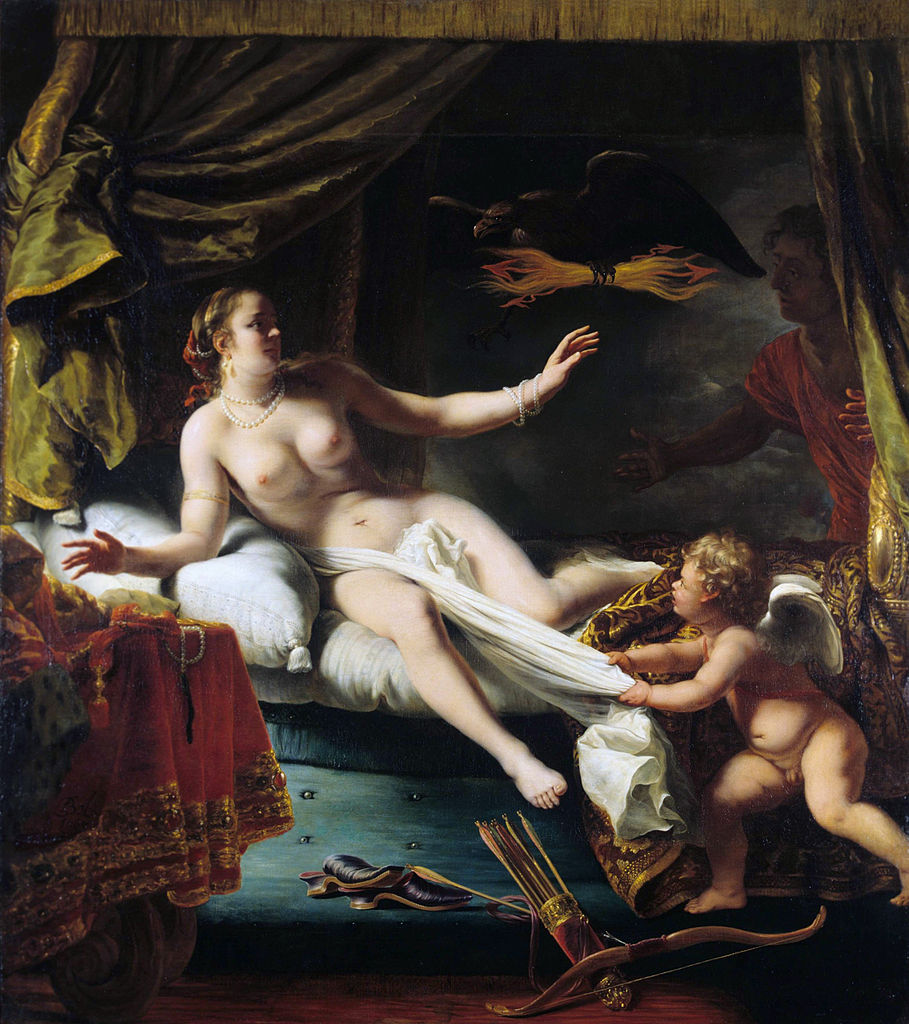 Zeus understands that the information was given by Sisyphus of Corinth and he orders Hades to create an example of Sisyphus by punishing him for eternity. Hades goes to Corinth and asks Sisyphus to come along with him to Tartarus. However, he realizes the situation and cunningly asks Hades to show how to put on the locks of the cuffs. As Hades innocently tries them on, he locks the cuffs and keeps Hades imprisoned in Corinth. This proves devastating as without Hades no one could die. Men who lost their limbs or torn to pieces were able to live as there was no Hades to take them to Tartarus. This infuriated Ares as his interests in battles and wars were getting deviated; so, he intervenes and imprisons Sisyphus. Ares frees Hades and brings Sisyphus to Tartarus.

Before getting captured by Ares, Sisyphus cooks up another plot to escape death. He approaches his wife Merope and instructs her as a last wish to not to bury him after death. She follows his instructions and makes sure the body is not buried. When Sisyphus reaches Tartarus and confronts Persephone he says that his place in Tartarus in unjustified. He claims that his body is not buried and no one placed a coin for the ferryman of river Styx. Therefore, he asks Persephone to send him to the upper world so that he could make things right. He asks for three days of life and Persephone accepts his request. As soon as he reaches the upper world, he neglects the agreement and lives longer than the requested there days.

After betraying the gods, they send Hermes to capture Sisyphus and bring him back to Tartarus. The judges of the Dead took into case all the betrayals, cunning feats and acts against the gods to judge Sisyphus. They show him a huge boulder and give him a task to roll it to the top of a hill and allow it slide from there to the other side. Although, the task looks reasonable enough the boulder is not an ordinary one. As Sisyphus rolls it near to the top, it magically loosens itself from his grips and goes hurling down to the bottom. The process is eternal and this time Sisyphus is bound eternally to the punishment of the gods. This is the most famous of the incidents people known from the myth of Sisyphus. 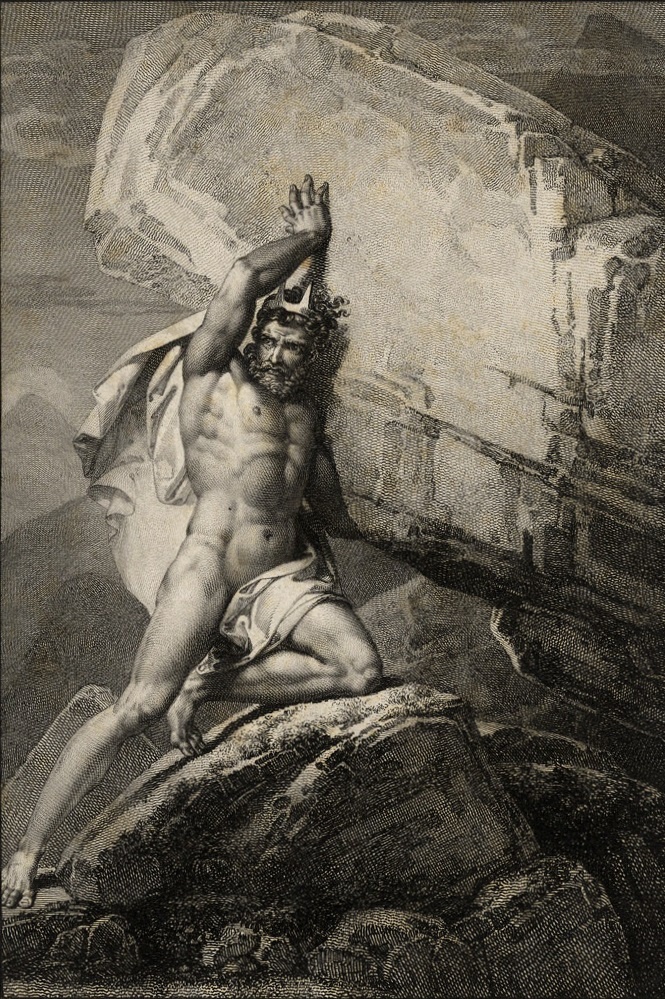 The Myth of Sisyphus is a lesson to those who try to cheat others in order to reach their desires. Hyginus and other writers have used the myth to show humanity that there are some actions strictly forbidden to mankind and if by will anyone tries to get to them; then, the consequences are severe. Although, there is no denial that Sisyphus is the most intelligent of people of Corinth and probably the Greek, he could not use it for the welfare of the others thus reaching to an undesirable end.