The much famed Narcissism and its philosophy of self-admiration came from the myth of Narcissus. Now, there are many sources that give out the myth in different versions. Some are bolder, some are more ‘un-fictional’, but the version of Ovid never hides itself in a cloak while trying to explain the emotions of Narcissus and the people who try to woo him. In Metamorphoses, Book – III, there is a comprehensive poetical description of the fate of Narcissus and how his pride leads to a tragical end. The myth of Narcissus is perhaps the most influential of the myths in the book, when we consider how it developed into a school of thought and how the modern man is so close to the Narcissus who knows only to admire him.

The Myth of Narcissus

Liriope was a woman from Boeotia who was loved by the river-god Cephisus. The river-god seduced her and she becomes pregnant. She gives birth to an adorable child named Narcissus. Liriope curious to know about the future of his beautiful son consults Teiresias – a famed seer. Liriope asks about the life of his son and how long will he live. Teiresias responds that as long as Narcissus doesn’t know himself, he will live for a very long time. Liriope couldn’t understand the sayings of the clairvoyant and takes Narcissus home.

Narcissus grows to the age of sixteen and he becomes the most adorable youth. He was desired by numerous women and men. However, the young boy developed a sense of pride in him. So, he used to reject any suitor who came for him in a dismissive fashion. 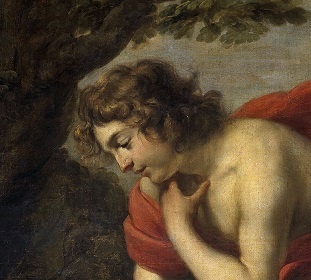 Now, there used to be a nymph with a babbling voice and is capable of answering a call, but never could she speak first. Her name was Echo. She watches Narcissus when chasing a Roebuck and falls in love with him. The reason for her incapable speech is because of Juno. Zeus loved to spend time with the nymphs and he wanted his meetings to be a secret. Therefore, he asks Echo (who has a lovely voice and ability to charm a person into hearing her speech) to engage Juno, while he goes out on his errand. After many such days of fooling Juno, one day she realized the act of Zeus and the role of Echo in it.

Juno says to Echo that her voice would be no longer prattling; instead the voice would become short. Since then, Echo could only repeat the words of an individual and that too the last part of the sentence. However, this drawback doesn’t affect her love towards Narcissus and she tries to win his love. Ovid presents the story of Echo in a short but in a most charming manner in the myth of Narcissus. One could immediately feel the passion of Echo and her disabilities that can dent her persuasions.

She would observe Narcissus as he wanders the country fields. Her desire to express love cannot bear any fruits, as she cannot talk. But, she longed to say sweet things to him woo him and describe his beauty using the most beautiful words. Unfortunately, this was not the fate of Echo who followed Narcissus every day.

One day, Narcissus notices that someone is following him. He asks if there is someone and hears the last part of his sentence as an answer. This goes on several times and he becomes scared of the reoccurrence of his words in another voice. The following is an exact conversation written by Ovid in the myth of Narcissus in his book Metamorphoses and for convenience it is made into dialogue form.

N: Is anyone there?

N: Why are you running away? (His words ring back to him again)

N: This way! We must come together.

E: We must come together! (Echo appears to Narcissus and tries to embrace him, but…)

N: Hands off! May I die before you enjoy my body!

While Narcissus was trying to find out about the person following him, Echo tries to use his words to make him aware that she is there and longs to meet him. As soon as he calls out to the voice that they must come together, Echo in infinite joy appears before Narcissus. But, her advancements are rejected by the boy and declare that he would die before she enjoys his body. Unfortunately, Echo repeats the last words “enjoy my body”, which portray her like a lusty woman who only wants to sleep with the youth. She understands it and with shame leaves the place and decides to reside in empty caves.

But, Echo couldn’t forget Narcissus and she was unable to get over the fact that she was shamed in front of Narcissus. As time went, her body disintegrated and what remained was her bones and voice. Eventually, the bones transformed into stone and all that was left was her echo that still roams around the Earth even today.

Similar to Echo many nymphs of the water and the land were mocked by the pride of Narcissus. Even the males encountered the same fate. Finally, one man who couldn’t get the love of the youth decides to end his life. Before suicide, he calls to the Heavens and asks that Narcissus may find true love, but he should never obtain the love he desires. Nemesis, the goddess of revenge, hears the prayer of the man and decides to punish Narcissus.

To seek revenge, Nemesis creates a pool in the mountains that is clear and silvery white. The pool hasn’t been touched by the travellers, goats, animals, birds and even the trees ensure that their dry leaves do not fall in the pool. It had a wonderful green lush surrounding the area and many trees to cover the pool so that shade is provided in the summer.

One day, Narcissus after having an exhaustive hunting session in the forest arrives at the pool. He becomes so thirsty that he drinks from the spring immediately. Gradually, his thirst to drink decreases; instead, he longs for something else that lurks in the pool. He sees his own image in the pool – a shadow – and is amazed at the pearly beauty of it. 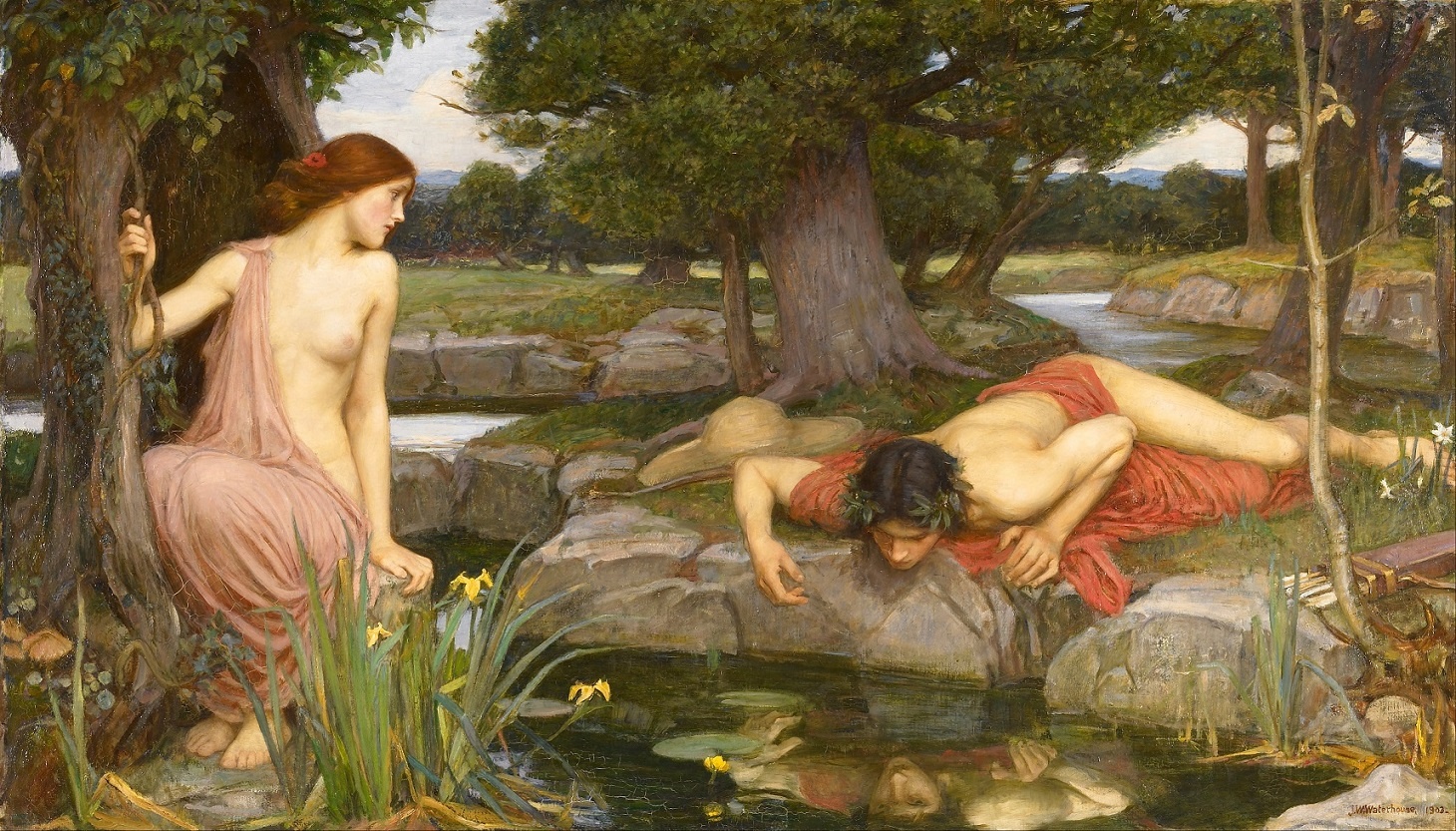 Ovid’s poetical skill in describing the beauty of a person is witnessed in this part of the myth of Narcissus, where he gives complete account of the youth. Narcissus gazes at his own reflection and finds a manly figure with marble like limbs and expressions. He finds twin stars when he seeks to find the eyes and the curly locks were similar to those of Bacchus or Apollo. The cheeks are silky smooth, neck had an ivory gloss and the face had a desirable blend of ‘blushing redness and creamy whiteness’. Narcissus becomes obsessed with the reflection and becomes a person of self-adoration. He at once becomes the sweetheart and the suitor, and he longs for the reflection to become his own in person.

Whenever, he tries to kiss the reflection the ripples in the pool would obstruct the endeavour and he would lose sight of the image. He tries to get near the phantom in many ways, but the pool would never let this happen. So, he stays at the pool devoid of food, sleep and other worldly interests. He lies over the grass and starts to gaze at the image and develops melancholy. After a while, he gets into a state where he believes that there is a youth in the pool and the water is the only thing that is separating them.

He expresses his sadness to the trees as thus:

“O Wise Trees! The condition of me is the cruellest as my love is not partitioned from me by the stretch of oceans nor the roads or the mountains; neither are we separated by walls. This thin layer of water is the barrier that keeps him from me. He wants to embrace me and whenever I long to kiss, he comes near. But this cruel barrier shatters our pleasure and mocks at out incapability to break from it. Whenever I look at the youth, I feel that I know myself and such is the passion I have developed for him. What can I do?”

[The monologue of Narcissus is not from the myth of Narcissus in Metamorphoses, but is a creative/imaginative interpretation of the CAU to depict the predicament of the youth.]

The end of Narcissus

Narcissus realizes that his life is coming to an end, but he accepts his fate and believes that death is sweeter than having a harsh life with heartache for the one he desires. He sheds tears when he sees the youth in the pool and they blur the picture of the youth. Narcissus thinks that the youth is going away and he implores him to stay. He tears his tunic and expresses his distress when he cannot see the youth. When the water settled and the reflection appeared again, Narcissus starts to admire the reflection. But, the beauty of the youth slowly faded away as the physical being depends on food and other things to sustain. As Narcissus was unable to take care of any of those he and his reflection lost the beauty they used to possess.

Echo, resented Narcissus for his deeds, but she never left him and she had pity over the youth. But, she has only become a reflected voice and she couldn’t do anything about his predicament except but to stay with him till the very end. Whenever, Narcissus used to give a pitiful sigh Echo repeated the sigh. When he beat his breasts in disparity, she mimicked the same through sound. When he was about to die, Narcissus states: “Oh marvellous boy, I loved you in vain! Farewell.” Echo with all her love resounds “Farewell” to Narcissus. From that moment, whenever a pitiful sigh or voice is heard Echo tries to respond.

Narcissus slowly fades away in the Hades where while crossing the river Styx where he finds the youth [his reflection] again. The dryads lament to the condition of Narcissus and Echo responds to their wailing by echoing their lamenting in Hades. At the place of death of Narcissus, a flower with pale white petals and trumpet of gold in the centre emerged and the body of Narcissus was never found. 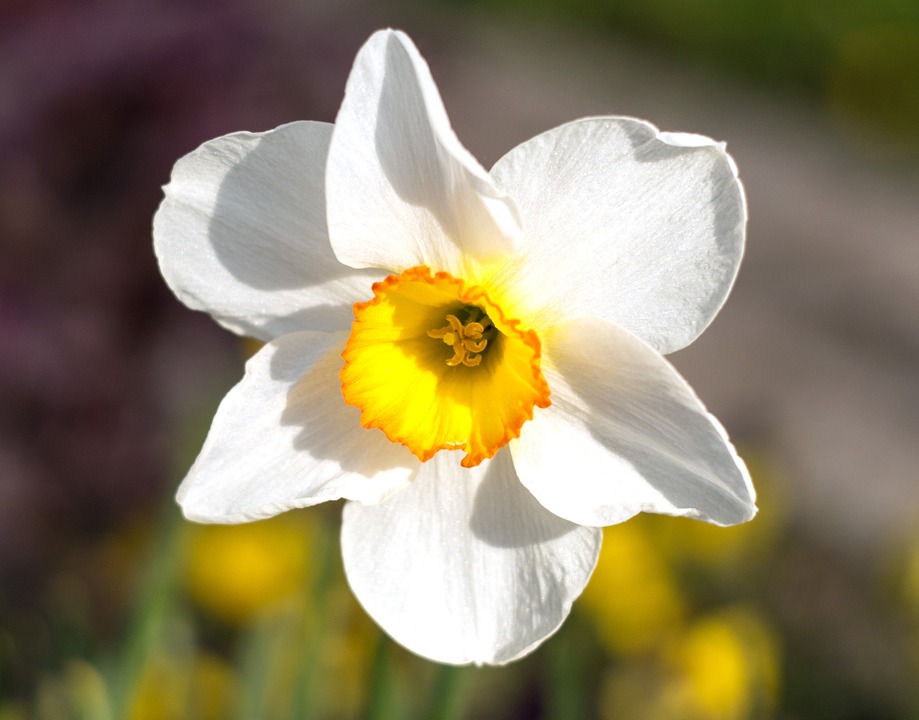 Ovid presents the myth of Narcissus in such an elegant style that the reader will start to pity the condition of Narcissus instead of chiding him for what he has done to Echo and other suitors. The lamenting end of Echo is balanced by the pitiful death of Narcissus and they both are in vain even after death. Nemesis does her part in answering the prayer and torturing Narcissus who was full with pride. Further, she makes sure that  Teiresias prophecy of “knowing himself” comes true and shows that the seer was aware of these circumstances when gave out those words to Liriope. Thus, the myth of Narcissus is complete, complex and with full of imaginative beauty, which could be expected from a poet like Ovid.