Geoffrey Chaucer, the author of “Canterbury Tales” made so great a contribution to the development of English that the people and the language itself should be forever indebted toward the Father of English poetry. Chaucer was born in the year 1340, London and served as public servant through his life. His parents are John Chaucer and Agnes Copton and he was married to Philippa de Roet. Geoffrey Chaucer had two sons – Thomas and Lewis Chaucer, whereas as historians and researchers believe that he had two daughters also – Elizabeth and Agnes Chaucer. He received several honours during his lifetime and died in the year 1400, October 25th. 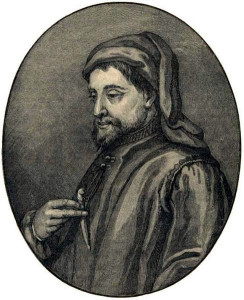 Chaucer was “the” first individual buried in the infamous Poet’s Corner of the Westminster Abbey.

He was involved in the Hundred Year’s War and was caught as POW (prisoner of war) by the French. However, a ransom was provided to the French for the release of Geoffrey Chaucer.

Although, Geoffrey Chaucer is known to us for the “Canterbury Tales”, he contributed greatly to the vernacular by translating the famous old literature texts.

Geoffrey Chaucer’s political career lasted for one year, when he became the Member of Parliament in the year 1386.

In the year 1374, King Edward-III recognized the services of Chaucer and granted wine (a gallon for a day) till the poet breathed his last. Unfortunately, Edward-III died after four years and the stipend was cut short. When Richard-II became the King, the stipend was converted into monetary allowance rather than wine allowance.

During 1374, Chaucer was given a highly-sought and great position as the comptroller of customs. As a comptroller he was meant to look over the financial matters of the Kingdom.

Apart from the “Canterbury Tales”, Chaucer is credited with writing nine major works. Some of them like “Troilus and Criseyde”, “Book of the Duchess”, “The Parliament of Duchess”, “The House of Fame”, etc. are still known today.

Geoffrey Chaucer’s “Canterbury Tales” was printed in the form of book by William Caxton in the year 1477. The book was kept in auction in the year 1998 and was sold for $7.4 million, a worthy price for a worthy book.

The style of Geoffrey Chaucer had lucidity in expression, originality, realism, philosophical maxims and never ending wit. As the inspiration to his successors in using the Rhyme-royal, Chaucer probably took the seed of English and through his works nourished it made into what we know as the proper English of today.