Francisco Goya was born in a time where there was great enlightenment in the form of a great ruler, followed by an unexpected war with the French and the vexing rule of a monarch who wanted to suppress everyone.  Goya was always known for his horrific portrayal of the subjects, but art critics admire his subtle strokes and use of background to display the finest of elements in a painting. The Third of May 1808 is one of such brilliant masterpieces by Francisco Goya admired by everyone for its historic value, representative message and a canvas illuminating the horrors of Spanish citizens during the massacre by the French troops.

Francisco Goya was never subtle in portraying the subjects which can be witnessed through Saturn Devouring His Son, Witches Flight and many of his dark themed paintings. The Third of May 1808 is no different and slams the point right into the viewer without any concealed messages or ambiguities. There are soldiers ready to shoot at common people and the landscape shows that they are brought far away from the town for the execution.

The Spanish crowd are more in number but have accepted their fate and are ready to die for the cause. Soldiers who are few in number are together without any visibility of faces and form on long line of executioners devoid of feelings or sympathy towards the helpless people. The line of people extends to the Church in the background. A single light is present illuminating the Spanish crowd as well as the French soldiers.

The crowd is hopeless realizing that they are in a death row. A monk seems to be praying for the dead, some have lowered their heads accepting their coming deaths, corpses are scattered without proper disposal and the central figure is sympathising for the predicament of the crowd. 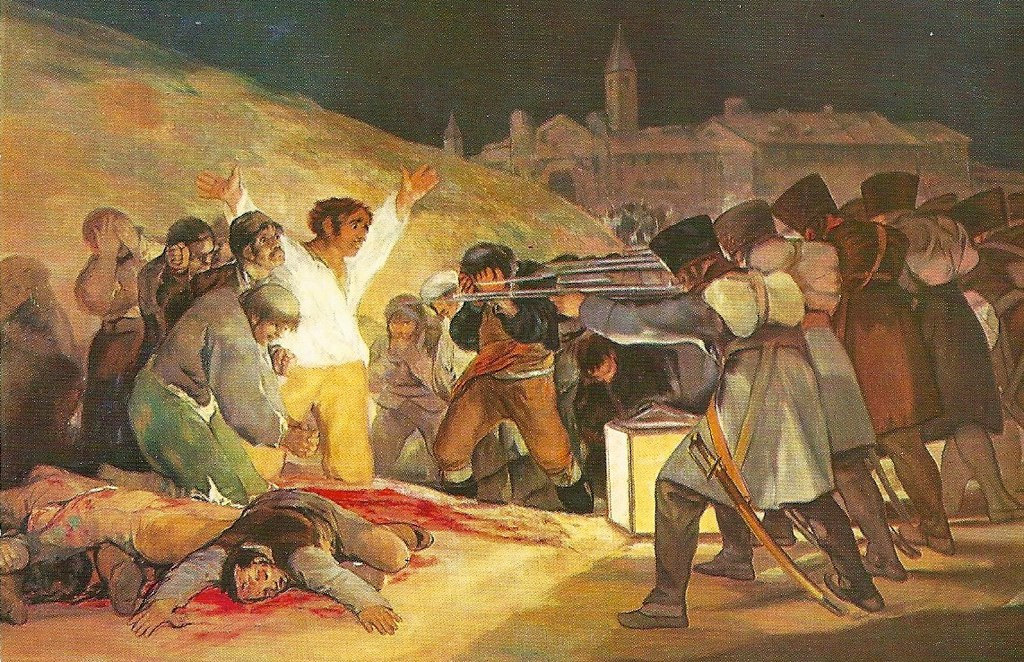 Goya uses some powerful symbols to show the difference between the French soldiers and the Spanish crowd. The soldiers are presented in a single row with concealed faces and a single action. They resemble a machine that only functions without having emotions towards the goal achieved. In other words, they have become the weapons they are holding and are shooting the masses as they are ordered to do so. It was unclear about the support of Goya among the Spanish and the French; this representation of the soldiers is a clear depiction of his support towards his own country.

The Church and the central figure in the painting show that the Spanish are equalled with the followers of Jesus who suffered for a long time before redemption. The man in the white robes can be identified as crucified Christ. The lamp sheds pure light on the individual and his unsoiled clothes show that he has fought for his nation with pure intentions. He is looking at the soldiers with great anguish as if he is showing sympathy for them. The stigmata on the hands of the person further strengthen his representation as Christ.

Goya shows the Spanish crowd as martyrs who died [and are about to die] along with men who have fought valiantly for their nation without any result. However, it is to be observed that there is no real hero in The Third of May 1808 who comes to save the people but stern reality of mass executions. Goya depicts the horrors of war in the painting that are real even when people are trying for a spiritual reprieve – the fact – battles are won through strategies and weapons, which Napoleon had cornering the Spanish royalty who did not expect a betrayal.

The Third of May 1808 by Francisco Goya represents the horrors of war and has become one of the best paintings to show the realistic nature of war. It is studied with other war paintings like Guernica, Battle of Chesma at Night, Consequences of War, etc. inspiring generations of artists and displaying what human cruelty can do.