Edvard Munch belonged to Norway and is well known as a printmaker and painter. He is referred to as a painter who tries to portray the psychological elements developing within the mind rather than portraying bare faces and landscapes. He was mainly influenced by the French painter Paul Gauguin, Dutch painter Vincent Van Gogh, French painter Henri de Toulouse-Lautrec and Swiss painter Arnold Bocklin. Therefore, his work is a culmination of expressionism, impressionism, symbolism and modern art. Munch has influenced two great movements of 19th century in Germany – Expressionism and Symbolism. Golgotha is majorly a symbolic painting representing the sorrowful years of the painter.

Golgotha was completed by Munch in the year 1900. In the upper right corner one can find the signature of Munch and the place from which he has painted Golgotha. He was in a sanatorium, one amongst the many visits in his life. Edvard Munch suffered a great deal from his childhood and the psychological maladies are found through his art. The year 1900 was heartbreak for Edvard Munch for he was unable to banish the habit of drinking and fear of marriage. As a result his lover Tulla Larsen left him to marry another individual who is a younger colleague of the painter. The period was of great suffering to Munch and his subsequent works represented his feelings towards Larsen and the mental agony he suffered. 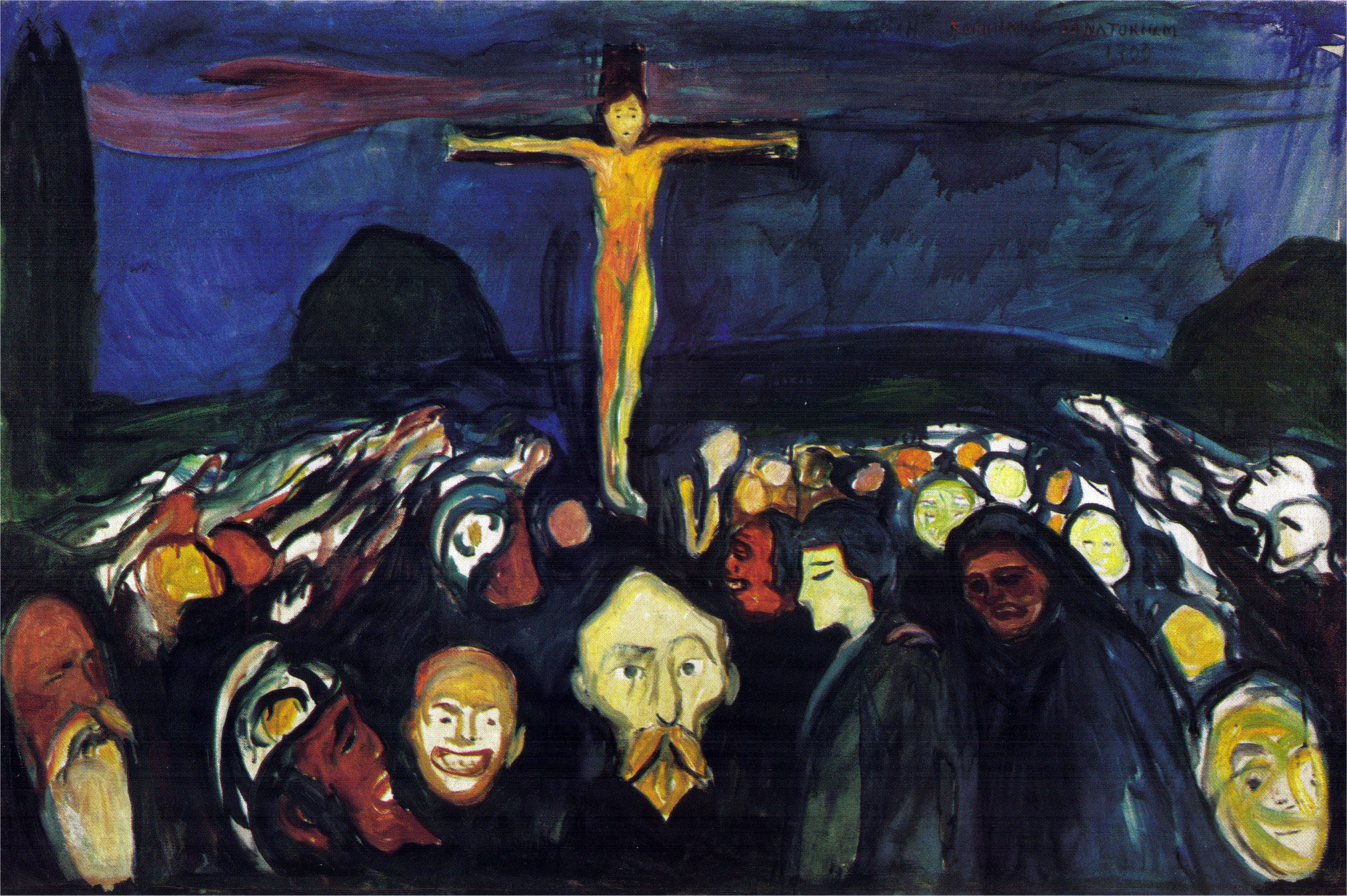 Golgotha is primarily considered as a religious theme as it represents the Crucifixion of Christ. However, there are many subjective elements found in the painting and the face of the Christ itself is portrayed as Edvard Munch. He is the central figure who is leaving his life without marriage and without liberating his inner demons. The people around are not looking at his face, rather they are looking at his feet, except for one person who seems to pray for him. It could be understood that she is Tulla Larsen, who cared so much for Munch. Unfortunately, it is Munch who could not get out of his problems thereby leaving her.

The seven prominent faces shown facing towards the onlooker can be considered as the seven cardinal sins. The central figure of the seven can be identified as Stainslaw, a poet and friend of Edvard Munch. His face is used in many of the Jealousy paintings completed by Munch in his lifetime. With envy being the central figure, the man crucified is deteriorated by his helplessness to clear himself out of the sins. This helpless nature might have occurred due to the mental illness, derogatory habits and severe life events. As a result, the crucified man in Golgotha is shown with no detail while the seven individuals are shown with prominence. A symbolic representation to show that man can have no identity if he is bound by the sins that confront him in life.

In addition, the painting also depicts the faith of Edvard Munch towards Christianity. There is hope in the painting and this hope is for redemption. There is always rebirth for those who try to fight their demons and emerge victorious. It is the virtues that help the individual to live through the sufferings and live in glory for the rest of the life. Regeneration is one of the greatest elements in life that a person must believe in, despite all the negative elements that surround him. Therefore, Golgotha represents faith in religion as well as the inner self that can regenerate itself to transform into a higher being. This philosophy is supported by one of the quotes of Edvard Munch:

“From my rotting body, flowers shall grow and I am in them and that is eternity.”