Salvador Dali might not have been the founder of Surrealist movement, but he is certainly the heart throb of the movement with his contributions ranging from sculptures to paintings to films. It’s as if people around Dali could feel the amplified personality radiating with love, imagination, novelty and creative enthusiasm. The Persistence of Memory, Swans Reflecting Elephants, Metamorphosis of Narcissus, The Burning Giraffe, etc. have made the prime most figure of Surrealism. The Burning Giraffe was painted by Dali in the year 1937, during the time of Spanish civil war.

The Burning Giraffe is a culmination of thoughts produced by the struggles of Spanish Civil War and the Dream interpretations and psychoanalysis of Sigmund Freud.

The Spanish Civil War of 1937 and the resulting political shifts in the country led Dali to leave his country and move to America. Dali always claimed himself to be apolitical, but the strife of war could be seen clearly through the painting. In fact, the Giraffe in painting is a premonition or presage of war that would occur in the near future. He observed Hitler’s reflections on his country and others when he was in Vienna [in 1937] and felt that apocalyptic incidents might occur. His premonition through The Burning Giraffe was indeed correct as two World Wars occurred, causing millions of deaths.

Freud has unraveled the mysteries of the mind and the dreams influencing almost every one of his contemporaries and successors. The psychoanalysis allows the human mind to open the deepest of secrets hidden within it, so that the individual can become more evolved. Salvador Dali felt that Sigmund Freud provided an opportunity to the civilization through psychoanalysis, an opportunity to find out everything about the mind, which was not possible for the great Greek civilization. Where the Greeks achieved great deal of art, philosophy and science through Neo-platonic approach, he felt that with psychoanalysis cold bring more into the world. The chest of drawers in The Burning Giraffe is a symbol indicating the psychoanalysis concept of Sigmund Freud.

Interpretation of The Burning Giraffe

Salvador Dali took a similar landscape in what seems to be a barren land with distant mountains or hills. The skies are clear for most of the scene except on top where dark clouds seem to merge with the head of the lead female figure. There are two female figures, a man like figure and a burning giraffe. The main figure is termed by Salvador Dali as Femme-Coccyx or The Tailbone Woman. 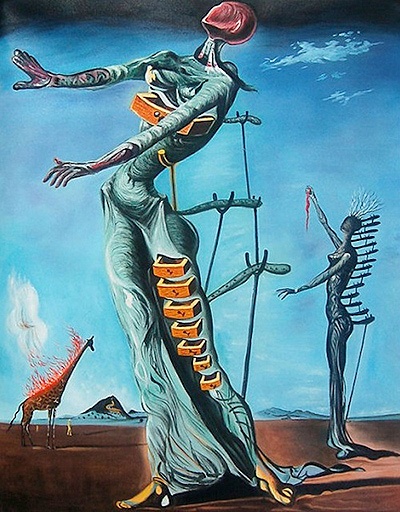 The lead female figure and the one to her left are stabilized with the help of crutches. There are a significant amount of drawers on the left leg of main female and there is a big wooden drawer near the chest. This symbolizes the psychoanalysis theory of Freud, employed by Dali in most of his works. The face is like polished stone without ears, nose, eyes and mouth making the figure completely helpless against any onset of trouble. The same is the case with the other female figure that is holding flesh and seems to have more crutches. The Tailbone Woman might symbolize declining human values, suppression of women, depleting status of Mother Earth and so many other things.

The Burning Giraffe in the background is considered by Dali as “the masculine cosmic apocalyptic monster” and it appears in his other works also. The man standing before it seems to be indifferent of the condition of the giraffe. The viewer can understand that the actions of man towards stopping a war or any disastrous situations are nearly zero. Throughout history, it is found that kingdoms, kings, politicians, barbarians, etc. crave to show supremacy over others and do not care for the dire situations following a war.

The Burning Giraffe by Salvador Dali is like a warning to the world about the possibilities of war, apocalypse and disappearance of ethical values. The only hope that one could find is through psychoanalysis and by opening the chest of drawers present in the mind to understand the secrets of the human body. The hope is further focused when one would compare the number of crutches found on the two women like figures. The main figure has many chest of drawers, hence has less crutches to hold her still; while the other figure has many crutches without any drawers making her hopeless. Overall, Salvador Dali has produced a wonderful message through his painting by uniting his views on women, war and psychoanalysis.

Get a canvas print of Burning Giraffe